From Utopia to damnation: This week’s visual arts highlights 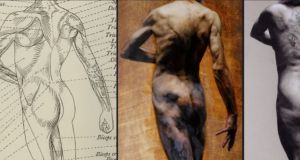 Paul Hallahan and Lee Welch take different approaches to the theme of “Utopia and the end of perceived history”, though the show does include a collaborative element: two joint works. Both artists share an interest in how people perceive and interact with the world. Several of Welch’s paintings based on tarot card readings are or have recently been on view around Dublin.

A performative response to “feminine place and landscape” in Asia, Latin America and Ireland, developed over a year in several locations, from Tokyo to Portadown, and including to-camera performance in video, photography, drawing and sculptural form by Sinéad O’Donnell. With a live performance and artist talk on February 12th at noon.

Using several 19th- and 20th-century artists’ anatomical guides as his starting point, Nicholas Robinson shows a number of life studies with an emphasis on anatomical form and structure. Some are drawn from life, others from plates in the books. His Swedish title – The Shape of Man or The Human Shape in translation – relates to his attendance at a Swedish atelier.

Marking the Soloheadbeg centenary, this show includes pieces from several existing bodies of work by Mick O’Dea dealing with the road to Irish independence and what followed, from 1916 through the Civil War, plus several new paintings. O’Dea draws on historical documentation to bring a crucial era vividly to life.

“Life seen through the lens of Satanic play” in paintings by artist and designer Fergal Fitzpatrick, who draws on J Huizinga’s 1938 description of modern humans as creatures who, thanks to automation and other technological developments, could devote themselves to play. Though it didn’t quite work out like that at the time. Fitzpatrick’s paintings highlight the pursuit of desire in the shadow of death.

Daniel O’Connell, the greatest of all politicians
10