The five best art exhibitions to visit this week 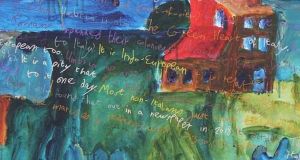 Rome Wasn’t Built in a Day (detail) by Fergus FitzGerald

The Gallery, Mermaid Arts Centre, Main St, Bray, Co Wicklow. Until March 16th, mermaidartscentre.ie
Fergus FitzGerald’s marvellously vivid paintings are faithful accounts of the places he researches and visits. Primed by preparatory study, he arrives – locations include Siena, Cefalu, Salzburg and Ljubljana – and is alert to every telling detail. His paintings are charged with open curiosity and incorporate his thoughts and observations in the form of annotations.

Kevin Kavanagh Gallery, Chancery Lane, Dublin. Until March 9th
Robert Armstrong’s “paintscapes” emerge from a process of addition and subtraction, as a squeegee drawn across the paint surface continually reconfigures the composition, erasing what was there while simultaneously opening up new interpretative possibilities, while suggesting that any momentary view is but a glimpse of a world “in a state of flux”.

Environmental exploration and research are at the heart of Siobhan McDonald’s work. This latest iteration of a project begun several years ago includes a new chapter relating to the Bronze Age earthworks known as the Black Pig’s Dyke, enhanced by the fact that last year’s drought revealed previously unseen underlying structures in the landscape.

VISUAL Centre for Contemporary Art, Old Dublin Road, Carlow, February 9th-May 19th, visualcarlow.ie
A fine painter and draughtsman in the classical tradition, while also thoroughly contemporary in his concerns, Stephen McKenna was a hugely respected and warmly regarded figure in Irish art. He had selected the works and even planned the layout of this retrospective prior to his death in 2017. The show is accompanied by a group exhibition of six younger artists who were in one way or another influenced by him.