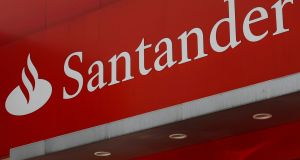 Andrea Orcel is set to launch a €100 million lawsuit against Santander after the Spanish bank withdrew its offer to make him chief executive. Photograph: Edgard Garrido/Reuters

Andrea Orcel is set to launch a 100 million lawsuit against Santander after the Spanish bank withdrew its offer to make him chief executive earlier this year.

Mr Orcel’s lawsuit, which was sent to Santander in recent days, alleges that the Spanish bank breached his contract and demands that the company hires him as its CEO or pays damages totalling 100 million, according to two people who have seen the document.

The lawsuit will not be filed or made public until Santander has had a chance to review its contents, one of the people said.

Santander withdrew Mr Orcel’s job offer in January just four months after it announced his appointment. The bank said it had reversed course after concluding it could not justify paying him a sign-on package worth up to 50 million to reimburse him for deferred compensation he would forfeit by quitting his previous job as head of UBS’s investment bank.

At the time, Santander said that the cost of reimbursing the Italian-born banker for UBS shares earned during his time at the Swiss bank would be “significantly above the board’s expectations”.

However, the FT has reported that the tense negotiation over Mr Orcel’s sign-on package was but one factor in the bank’s decision to reject the Italian-born banker. Santander’s executive chairwoman, Ana Botin, also started to doubt her decision to hire him after the pair sparred over what level of public profile he would have after joining the bank.

Mr Orcel had already quit his job at UBS when Santander rescinded its offer and was working a period of gardening leave, meaning the Spanish bank’s decision left him unemployed.

The former head of UBS’s investment bank had been expected to launch legal action against Santander. In an interview with the FT earlier this year, the Italian banker revealed he had hired a legal team and sent a warning shot to the Spanish bank: “I’m not known to be a person that lets go, especially when I think that the right thing to do is to not let go.”

The 100 million claim for damages is calculated by adding the potential earnings that Mr Orcel missed out on after the job offer was rescinded, as well as legal fees and other costs, according to one person briefed on the lawsuit.

It could prove highly embarrassing for Santander if it were forced to pay anything near that sum, given that its stated reason for withdrawing Mr Orcel’s offer was that it could not justify paying him half that amount. – Copyright The Financial Times Limited 2019