‘I left my home, my boyfriend and my dog and upped sticks’ 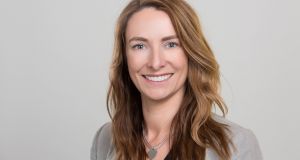 Kate Hoare: “There is a great ethos here. You get on with it. You work hard, you play hard. You support each other. It’s very simple. That’s what America is all about.”

Kate Hoare left her home town of Skibbereen in west Cork after completing her Leaving Cert to travel to Paris in 1999, where she studied French and French civilization at Sorbonne University.

“Coming from a small town, it was an amazing experience. I went to museums and galleries, lived close to the city and took it all in for a year.”

Upon her return to Ireland, she studied economics and German in Trinity College, also spending a semester in Cologne, Germany.

“When I finished my degree in 2004, I went to work for Hibernian Insurance, now Aviva, in Dublin, and worked as an English teacher saving up to go travelling.

“My friend and I spent several months travelling around Asia before we went to Australia. After my friend returned home, I went to Melbourne for two weeks and ended up staying there for 10 years.”

After completing a masters in economics and econometrics at the University of Melbourne, and working as a research fellow at the college and at Levis, the clothing giant, Hoare entered the world of finance at an “interesting time”.

It was 2008. Just as the financial crash happened, she started a new job at Frontier Investment Consulting where she worked at first as an analyst, then as a consultant providing independent investment advice to investment fund clients about superannuation and endowment funds.

“It was a baptism of fire. I was working at a high level. Everything was changing so fast.You’d put together a put strategy for clients, by the time you’d written it, the landscape had changed already.”

After four high-octane years, she took a job at Australian Unity, a member-owned wellbeing company, as a senior investment specialist.

“I was very lucky. It was also a fantastic job. I was reporting directly to the general manager, responsible for two of AUI’s joint venture partners, Wingate Asset Management (global equities) and Seres Asset Management (Asian long/short equities). I was back and forth to Hong Kong every six weeks.”

But in late 2014, after 10 years in Australia, Hoare wanted a change and decided to move to New York.

“I left my home, my boyfriend and my dog and upped sticks. It was really hard, especially leaving my dog behind. I came back home to Ireland and did the Christmas Day swim in Skibbereen. Needless to say, the difference in temperature compared to Australia was immense.”

In the new year of 2015, she left Ireland for New York, deciding to get a place in the West Village and look for a job while she was there.

“It’s not a strategy I would advise, unless you have a decent amount of money put away. The interview process is very lengthy, but I really enjoyed my time in New York.”

Hoare says she had to tap into her networks upon landing and contacted as many people as she could.

“In the US, networking is key so I got in touch with all my contacts in Australia and anyone I know with possible leads in New York.”

The interview process, she says, is rigorous. “They don’t just want you for your skill and your capabilities. They want to see if you suit the culture of the company too. The work culture in the US is very similar across the board,” she notes, “unlike in Europe, where it changes from country to country.”

Hoare says she was very fortunate to have an E3 work visa, for which only Australian citizens are eligible.

“I have an Australian passport, which allows me to work in the US, so it made the process much easier, also from the perspective of potential employers.”

After several months of searching, Hoare was offered four jobs and went for the job in San Francisco with Wells Fargo, the multinational financial services company headquartered in the city.

“You have to go through many, many interviews. I did 22 interviews for my current job at Wells Fargo. The interview process was rigorous, but once I knew I had the job I had time to move out west and find a nice apartment in downtown San Francisco.”

Hoare says the decision to leave New York was tough.

“I absolutely love New York, but having lived in Melbourne for so long made me appreciate the great outdoors and you get that in spades in San Francisco. There’s just so much nature out here.”

Hoare took up her position as a VP for international distribution strategy and support at Wells Fargo.

“It’s a very interesting job and life in San Francisco is great. I got engaged to an American man so I’m here for the long term.”

Hoare says, despite the obvious upsides of living on America’s west coast, you have to work hard and you need money to survive.

“Not everyone is so lucky. There’s a lot of homeless people here, and the disparity is huge and getting bigger.”

Like a third of the global population, Hoare is currently on lockdown, due to coronavirus.

“I’ve been working at home since before we were officially told to stay indoors. My company has been great. A lot of my clients are in Asia, so I have to work evenings from home anyway.”

Hoare says, she’s glad she still has her job, as does her partner, as so many people have lost theirs.

“We’ve adapted well to the new reality, and still get to go out very early in the morning and late at night for runs to avoid crowds. Obviously we are following the protocols, but I fear that this will increase inequality in the city. The poor, as in every crisis, will suffer the most.”

Time, Hoare says, will tell how long the virus lasts and what the implications will be globally and economically.

“No one really knows when or how we’re going to come out of this.”

If anyone wants to come to the States, once the virus is over might be a good time for new beginnings, she says.

“The US is suffering, but there is a great ethos here. You get on with it. You work hard, you play hard. You support each other. It’s very simple. That’s what America is all about.”