‘It’s great to prove your worth to these heavy hitters’ 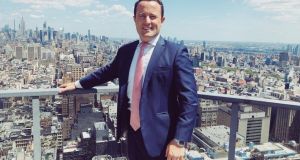 Alan Stenson: ‘You’re in a room with two or three billionaires, and one is writing a cheque for $15 million to the other’

Mullingar native Alan Stenson had barely touched down in New York City when he began laying the groundwork for his American dream. Seven years later, he’s one of the city’s most successful real estate brokers, taking home his cut of more than $250 million worth of sales over the last five years.

His secret to making it in the Empire city?

“I flew into JFK the day before Paddy’s day, at about 1am,” explains the 31-year-old senior director with investment real estate brokerage firm Brax Realty. “I had work lined up and the next morning I was down in Soho laying a wooden floor at 6am. On my hands and knees banging away.

“I worked 14 hours that day, got up and did the same thing the next day.

“Any bit of work that came my way, I was doing it. I was asked by a guy if I played tennis, and I said I do. A week later I was doing private coaching lessons with a group of six-year-olds down in Tribeca – and the last time I had picked up a tennis racket I would’ve been about six myself. This was after doing a day’s work laying floors and, after the tennis finished, I’d go bartending until 2am. New York is a place where you say yes and figure it out afterwards.

“This is the kind of graft you have to do for the first few months. And that’s what a lot of people who come to New York don’t realise.”

Graduating from GMIT with an honours degree in property studies in 2012, he worked in Galway and London before moving to the US. He’s currently working on a $53 million dollar development site in New York and, before Covid-19 hit, had sold $11.45 million worth of property in the first quarter of 2020.

“While I was working all those jobs I was also interviewing for corporate companies. So I would have to take two hours off in the middle of the day, go home and get showered, put a suit and tie on.

“I targeted the biggest and best real estate brokerage company in the city, Marcus and Millichap. I targeted the guy I wanted to speak with and went into the company and sat there until he was able to see me. That was on a Thursday evening and I started that job the Monday morning at 8am.

“The only thing about these corporate jobs is that you’re worked to the bone. I was working 80-plus hours a week. You work ‘till you drop’ on a Friday evening at 8pm. I used to get the train back out to Brooklyn, and I’d constantly fall asleep on the train and end up at the end of the line. So I tried standing up, and it got that bad that I used to fall asleep standing up and still missed the stop.

“They tell you before you start, you need to have a year’s rent lined up because you mightn’t see a dime for a year. In the first class I was in, in corporate training, 30 of us started; there are three of us left in the business now.”

After three years he took a big risk, leaving for a considerably smaller boutique investment firm – Brax – where he is now the point person on all-multimillion dollar deals. Since making the switch, not only has his income rocketed, but he’s also made time to run the New York marathon on three occasions and, last year, married Laurie, “a real New Yorker and an even harder worker than I am” in Dingle, Kerry.

“My first few deals were all memorable. You’re in a room with two or three billionaires, and one is writing a cheque for $15 million to the other and you’re sitting between them after brokering a great deal for your client [the seller].

“It’s great to prove your worth to these heavy hitters, and then you’re walking out of there with enough money in your pocket to buy a nice family home in Mullingar with a bit of land along the lake.

“But in this business, you eat what you kill. I’m not on a salary, it’s solely commission-based and it all depends on how hard you work. So when markets turn you could have a drought for a couple of months. That’s the nature of the beast.”

As well as a limitless appetite for hard work, Stenson thinks he’s also been helped along the way simply by being Irish.

“The key is face time, but in order to get face time, you’ve to make the calls. On a normal day, I might call 100 people. And if that person is in the city, be ready 24/7 to drop everything to go and meet them.

“And that’s the difference between a young, motivated Irish person who knows how to work.

“We’re loved all around the world, a nation that literally has no enemy. So what I like to do is bring some of my clients, afterwards, in to an Irish setting. And we’ll sit at the bar and have a pint of Guinness. And I’d know the bartender and we’d meet someone in there that we know. And we’d talk about real estate, we’d talk about these buildings and their Irish history.

“You can bring someone out on a yacht or on a private jet, but you’ve got to be able to relate with them. Real estate at the end of the day, you need to put in the time, you need to sit down in front of them and pick their brains, listen to them. That’s how you do business, and that’s where being Irish is a big advantage.”