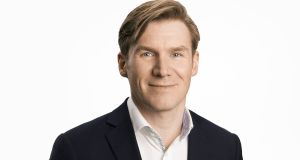 Armagh native Paul McCusker who lives in Amsterdam, which he describes as ‘a beautiful city and very manageable’. Photograph: Robert Severi

Originally from Armagh, Paul McCusker started his career in the family farm business. It was to pique his future career interests and, as soon as he finished school in 1995, he studied agriculture economics and management at Queen’s University Belfast.

“I went straight from my primary degree to do an MBA at the University of Ulster. I was the youngest in the class and it was my experience working on the mushroom service business back home that got me into the course.”

McCusker says the MBA opened up a new world to him. “I’m from a small town, so meeting people who had big aspirations and different ways of looking at things really opened my eyes. I also ended up meeting my wife on the MBA course.”

Upon graduation, he set his sights on working within the dot.com sector, moving to Dublin in the early 2000s, with his degree, his MBA and Microsoft certified exams under his belt.

“My first job was setting up a HR software company within Irishjobs.ie. The Celtic Tiger was roaring at the time, so we hit the ground running. The company, Candidate Manager was based in Malt House in Dublin and offered online HR services. I started as chief operating officer, and became the CEO, as the company grew to 35 staff.

“They were exciting times but then the crash happened and, inevitably, we didn’t escape its effects.” McCusker said he had to learn some “tough lessons”, before leaving the job and Dublin, and moving back to Northern Ireland in 2010. “My first daughter was on the way and we decided to buy a house in the country.”

He took a job as commercial director at Ireland’s largest power station in Ballylumford. Shortly afterwards the plant was bought by AES, a Fortune 200 global power company that owns and operates a portfolio of energy storage, electricity generation and distribution businesses and McCusker was offered a job in London.

So, just eight months after moving back to Northern Ireland and buying a house, he and his family packed up and moved to Richmond, south of London, with two children under the age of two.

“It seemed kind of crazy, but we rented out our house, which we had recently done up and went for it. I worked as a chief information officer for the EMEA (Europe, the Middle East, and Asia) region, leading a series of strategic transformational change projects, restructuring and aligning the IT organisation as a value enabler for the business.

“There were 150 people working in London, but we decided to close the office and move to Amsterdam. It was more for practical reasons. The Netherlands is very business friendly and flexible. We already had a business here and wanted to consolidate it.”

The McCusker family moved again. This time with three children under the age of three.

“We created a joint venture with the German multinational Siemens, of which I am vice-president EMEA called Fluence, which we launched in January 2018.”

Fluence is a global energy storage technology and services leader, which provides energy storage solutions to integrate renewable energy, such as wind. Despite its affiliations with AES and Siemens, McCusker says the company is independent with an independent board and new technology.

“We have 180 people now working in Amsterdam, in Arlington, Virginia and in Erlangen in Bavaria, as well as people in London, Melbourne, the Philippines. It’s been fantastic. We’ve done very well and outperformed our projections.

“Because there are so many nationalities working together and converging, we do have cultural challenge, but it’s a timely enterprise.”

McCusker says the company is trying to provide a higher level of renewables, working for wind farms and other renewable energy sources, that are also economically viable.

“The good news is that most sources of renewable energy are more economically viable. It’s not the answer to everything, but there is a significant growth in storage in Ireland and the UK.”

When his family first moved to the Netherlands, it took a while to adapt to Dutch culture. “The first six months were tough, and my wife was pining to get back to London but, over time, we got to appreciate the city.”

“I haven’t owned a car since I moved here, the entire city is laid out for bikes, unlike Dublin. Transport wise, it just works.”

Amsterdam, he says, is a transient place with a lot of people just passing through from all around the world, which makes its difficult to form long-lasting bonds. But it also has its benefits. “I think my girls are the only Irish people in Irish dancing class so you get a great mix of people around.”

“Everything is really compact here. Every district is like a small town with schools and amenities close by. If you need a car, there are street cars you can use everywhere, and you pay via app. The Dutch just make things that seem difficult back home, easy.”

For anyone thinking of moving to Amsterdam, he suggests renting a little farther out, as city rents are high. “You pay a little less than Dublin in the city, but considerably less outside, and, because of superior transport systems, you won’t be stuck in commuter hell getting in and out of town.”

McCusker says that despite its reputation as tourist trap, Amsterdam is a great place to live. “It’s a beautiful city and very manageable. It’s also very central in Europe and you can be anywhere in a few hours. We’re also still discovering quirky places to visit– even after being here for seven years.

“We’ve adapted well to Dutch life, which is very different to Irish life. But the kids are in school now, so we’re here for the foreseeable future,” he says. “Obviously we miss Ireland, but there’s also no shortage of twee Irish pubs and events on throughout the year, should we get homesick.”