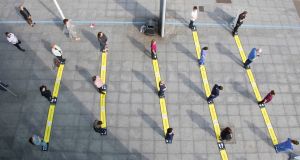 Overall, more than 4,000 people from outside the EU have been granted work permits to come to Ireland this year

Ireland looked outside the European Union for healthcare workers in March as hospitals across Europe struggled to cope with the mounting of coronavirus crisis.

Healthcare workers accounted for almost half of all work permits issued last month to non-EU nationals. The 593 permits granted to this group was greater than the number in the previous two months combined.

Beaumont Hospital in Dublin along with Our Lady of Lourdes in Drogheda, St Vincent’s, the Children’s Health Ireland, St James’s and the Beacon were the hospitals most active in seeking work permits for non-EU staff in March.

“Since this crisis began, the department has been prioritising the processing of employment permit applications for medical personnel,” the Department of Business, Enterprise and Innovation said in a statement.

“And these applications are continuing to be prioritised. Since mid-March, 864 employment permits have been granted to medical personnel.”

Overall, more than 4,000 people from outside the EU have been granted work permits to come to Ireland this year, with only a slight fall in March as the Covid-19 crisis began to deepen.

Last month, 1,229 work permits were granted for employees to work in 480 businesses around Ireland, according to figures. That compared to 1,447 permits approved in February and 1,351 in January, Department of Business, Enterprise, and Innovation figures show.

There was a significant falloff in agricultural workers getting permits between February, when 461 were granted, and March when there were only 130.

In terms of employers, Dawn Meats, Slaney Meats, Google and Anglo Beef Processors accounted for the largest number of permissions in March.

People from India made up by far the largest proportion of work permissions according to the figures.