‘In Austin, there just seems to be something for everyone here’

Wild Geese: Caroline Murphy moved to Austin in 2014 in search of adventure 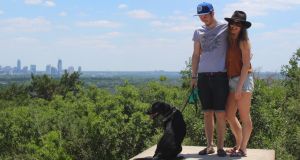 Caroline Murphy with her husband and dog in Austin, Texas

International business and management graduate Caroline Murphy left Ireland in 2014 in search of adventure. She relocated to Austin, Texas, with her boyfriend (now husband) Aidan Murphy and, in a few short years, the couple have acquired at least two of the main items associated with settling down – a dog and a house.

While finding her feet in Austin, Murphy took a couple of jobs including working as a property leasing agent and as a churro (a fried dough sweet pastry) maker in a food truck before joining recruitment company Indeed as a product analyst in 2016. She has since been promoted to her current position and is part of a small international team whose role is to oversee the company’s website for Ireland and Britain and to look at ways in which Indeed can grow in these markets.

“To be assigned to a specific market, you have to have experience of living and/or working there so this role was a natural fit for me,” she says. “We already have a number of different strands to our business, such as CV search, employer dashboards and company and jobseeker pages, and my role is to develop this further.”

Murphy is also a certified yoga instructor who loves the great outdoors. The Texan climate is ideal for her as it allows her to spend her free time light mountain biking, rock-climbing, walking, taking road and camping trips around the United States and hiking with her husband and their dog Cici.

“2014 was a dull Irish summer of tedious commutes and I began to get itchy feet,” she says explaining her decision to emigrate. “I didn’t hate my job as a marketing assistant with a recruitment company, but I didn’t love it either and there was nothing tying me to Ireland at the time. I have dual citizenship between Ireland and the States so it was easy enough for me to up and leave.

“My husband was already looking into getting a J1 graduate visa that allows recent grads to live and work in the States for a year after they’ve graduated college so that’s exactly what we did.

“I love the beach and had been leaning towards moving to California and maybe settling in San Diego, but Aidan had been doing some research and he thought Austin sounded really interesting so we decided to try it. If it didn’t suit we’d just go elsewhere,” Murphy says.

“As it turned out we love Austin. It’s very different to the rest of Texas in that it’s very liberal and cool. It’s full of young professionals so there’s a great buzz and lots happening.”

Murphy says one of the first differences she noticed between Irish and US businesses is the gulf in approach to customer service.

“They have amazing customer service in the States,” she says. “People are willing to do whatever they can to help you. In the shops in particular, they are very hands on while the service in restaurants is very, very attentive. It can be a bit OTT sometimes when you’re from Ireland, but that’s how they are and they really work at it.

“In my experience, Americans in general are very hard workers and there is something of a workaholic culture here. People don’t take a lot of time off. They only get about 10 days of annual leave per year which is so different to what we’re used to and very often people don’t take their days off. Sometimes I think they’re afraid they won’t have a job to come back to.

“I’m very lucky that I work for a company that offers unlimited paid time off to its employees and strongly encourages staff to take advantage of this. To be honest, I’ve never seen anyone abuse it. People take the time they need and the company is happy as long as you’re getting your work done, executing your role properly and meeting your goals.”

One of the things Murphy likes most about living in Texas is the weather. “It’s sunny and hot every day in the summer which just puts me in the best mood ever,” she says.

“Austin is also a really active and ‘artsy’ city and the food is amazing. I always look forward to a good breakfast taco when I’ve been away for a while. There just seems to be something for everyone here and the opportunities seem endless. Living in the States has also made it much easier for us to travel and explore different cities all over North and South America which I’m really enjoying.

“On the employment side of things, working with Indeed has given me a really good opportunity to advance my career in the tech industry and I feel lucky to be working in a company that values its employees.

“I work in a very international environment and there are people here from literally all over the world. Of course, there are cultural differences to get used to, but the company puts a lot of effort into training people to be aware of them so we can work together to get the best result.

“I also enjoy that we have a mix of Irish and international friends here and one of my younger sisters followed me out and is now also working with Indeed.”

Asked about job opportunities in the States, Murphy says “Recruitment is a big thing here so there are good opportunities in that space and of course the tech industry is huge, with engineers particularly in demand with salaries to match. With US companies expanding globally I think there are a lot of opportunities for Irish people to provide value here through their knowledge of culture and norms outside of the United States.”