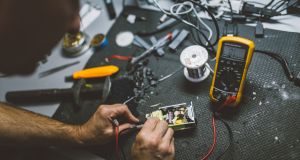 National Electrical Contractors Ireland this week succeeded in getting in the High Court to stay part of a sectoral employment order for their industry. Photograph: iStock

Electricians could potentially spark a constitutional crisis of sorts in the building industry with their challenge to the latest sectoral employment order issued by the Government.

National Electrical Contractors Ireland (NECI) this week succeeded in getting Mr Justice Charles Meenan in the High Court to stay part of a sectoral employment order for their industry demanding that these businesses pay into the Construction Workers’ Pension Scheme.

The ruling got them over the first hurdle in a challenge to an order signed by Minister of State for Employment Pat Breen setting pay rates and other conditions for the industry.

NECI is arguing against the order on several grounds, including that the Minister, and the Labour Court, on whose recommendation he was acting, failed to follow the procedures set out in the Industrial Relations (Amendment) Act, 2015, which created sectoral employment orders in the first place.

The 2015 Act itself is central to another part of NECI’s challenge. The organisation says the legislation is contrary to article 15 of the Constitution, as it allows bodies and individuals other than the Oireachtas to make laws.

NECI faces a challenge on this particular front. While the courts do strike down legislation because it is unconstitutional, they don’t do so lightly. If the organisation does win on this ground, it has ramifications for construction as a whole, as sectoral employment orders based on the 2015 legislation already determine pay in the industry.

The Oireachtas passed the Industrial Relations (Amendment) Act, 2015, because the courts found that the old Registered Employment Agreements, created by a law dating back to 1946, were unconstitutional. Those agreements determined pay in construction and other industries.

So, it would be ironic if NECI was to win its case on constitutional grounds. Not only that, it would – once again – make our legislators, many of whom are lawyers, look constitutionally illiterate.