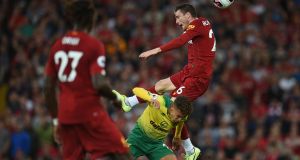 Sky Sports had the rights to Liverpool’s Friday night clash against Norwich City, but many more fixtures are only on BT Sport or Premier Sports. Photograph: Oli Scarff/AFP

A lot has happened since 2016, when Virgin Media Ireland chief executive Tony Hanway defended Virgin’s move to drop the Eir Sport pack of channels by insisting it was “not an integral part of the Virgin Media product offering – it never was and now it never will be”.

Since then, Virgin has launched its own sports channel, the distribution of BT Sport has switched from Eir to Sky, while Setanta co-founder Mickey O’Rourke returned with Premier Sports, which Sky also distributes.

So while this week’s agreement between Virgin Media Ireland and Eir to carry each other’s sports channels will feel like progress to some – specifically, Virgin rugby fans keen on some heavy Rugby World Cup consumption – for followers of the English Premier League, it will be a bittersweet reminder of a rather frustrating status quo.

Alas, Virgin Media Ireland is unlikely to strike the kind of deal with Sky that would allow Virgin to offer BT Sport and Premier Sports to its subscribers as a paid-for add-on (in the same way that Virgin customers have long been able to access Sky Sports). To do so might dilute the pulling power of Virgin Media Sport’s live UEFA Champions League coverage, which overlaps with BT Sport’s rights to the same tournament.

Three years ago, when Virgin dropped the Eir Sport pack, the only Premier League rights that its customers couldn’t watch were the 42 matches that BT Sport had then. Indeed, Virgin cited Eir’s loss to Sky of a separate batch of Saturday 3pm kick-offs as the reason why Eir Sport’s wholesale price had become too high. Premier League was the Eir’s “currency”, Virgin said.

But under the new Premier League broadcast rights agreement, Sky Sports has 128 matches (including “first pick” each weekend), BT Sport has 52, while some 33 Saturday 3pm fixtures have gone from Sky to Premier Sports, which also has a further 20 matches. Eir has no Premier League rights at all.

Between BT Sport and Premier Sports, there are 105 live Premier League matches not available to Virgin customers at any price if they continue to stick with the company. And if they do, well, there’s always Match of the Day.