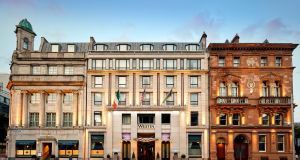 A €5.5 million investment by the owners of the five-star Westin Hotel in the centre of Dublin has added 19 smart new double bedrooms and expanded its popular Atrium lounge on the first floor.

It’s a signal of their confidence in the future of the business, and its ability to continue to attract well-heeled Americans, who make up about 60 per cent of the guests.

Yet there are also clouds on the horizon, with uncertainty around Brexit, a US-China trade war bubbling away, stock markets in flux, and concerns about Germany tipping into recession. Such uncertainty weighs on sentiment and means event organisers are often slow to make bookings.

Closer to home, a glut of new hotel rooms in Dublin has boosted competition and resulted in a softening of the market. Some 1,000 additional bedrooms have been added (or are about to open in the case of the 250-bedroom Hyatt on Thomas Street) within 1 kilometre of the Westin in the past year, with thousands more in the pipeline.

“One thing that’s happened this year is a sense of levelling out . . . since 2013, there has been year-on-year strong growth in occupancy and rate. The additional hotels that have opened this year . . . overall that increases the supply to the city, which softens occupancy slightly for everybody,” the Westin’s general manager, Eamonn Casey, told The Irish Times.

He added that the number of nights in the city when there is literally no room at the inn has also been reduced.

This extra capacity is good news for customers in terms of rates, which have been “slightly diluted”, according to Casey.

On a more positive note for Casey, there has been a strong rise in the number of visitors travelling here from China and Russia, helped by the addition of direct flights in recent years.

“We’re starting to see positive green shoots between Dublin and China and Russia. Russia particularly. It’s not uncommon for us to have reasonable numbers of Chinese visitors and delegations from Russia. There were two or three occasions last year when we had Russian conferences. And as a destination, Ireland is being promoted in China.”