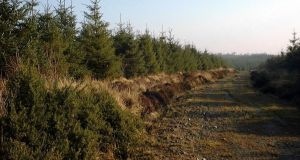 It turns out that money doesn’t grow on trees after all.

Forestry investment funds were all the rage in the late 1990s and early noughties, as thousands of retail investors were lured by suggestions of huge returns after lock-in periods of typically up to 30 years.

One of the main operators in the sector, Irish Forestry Funds (IFF), co-founded by industry veteran Paul Brosnan, suggested in some of its early prospectuses that investors might receive compounded annual returns of up to 14.6 per cent.

Such “illustrative returns” aren’t cast-iron legal guarantees. But the inclusion of these lofty figures in an official 1997 prospectus is evidence of the hype surrounding the sector at that time.

To the surprise of many of the 12,400 shareholders who pitched in over the years, IFF has just sold its portfolio of 18 funds to Axa Investment Managers. Shareholders, who thought they were locked in for years still to come, weren’t consulted ahead of the sale, which was decided by Brosnan and IFF co-director Trevor McHugh. The directors say the decision was legally mandated to them.

McHugh says many headwinds are affecting the sector, from Brexit to crop disease to the US-China trade war

IFF investors’ cheques arrived in the post on Wednesday morning, and, judging from correspondence to this newspaper and on online forums, many are furious with the outcome.The Axa deal has resulted in annual returns of between 2 and 3 per cent in most cases. That’s a far cry from the huge “illustrative returns” in the marketing bumph.

McHugh insists there are many headwinds affecting the sector, from Brexit to crop disease to the US-China trade war. He defended the sale and the returns by saying IFF had “locked in value” for investors.

Veon, a company in which McHugh and Brosnan are involved, is being kept on by Axa to provide “technical” forestry management services.

Fund investors, meanwhile, are left licking their wounds at what they see as paltry returns, although at least they’re not sitting on losses.

When it comes to making investment decisions, retail buyers would do well to stick to a golden rule: never, ever believe the hype.