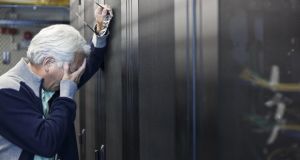 When tech workers reach the age of 45 they see the number of jobs they are offered drop, according to tech recruitment platform Hired.

Bob Crum finally bailed out of the tech industry last year, after four decades working for Silicon Valley companies such as Hewlett-Packard, Sun Microsystems and Cisco. When his contract with Cisco ended, he tried to find a job elsewhere, but quickly discovered that, aged 62, his “richness of experience” was seen as a hindrance, not a help, in today’s tech industry.

“I was told: ‘We decided to give this job to someone earlier in their career, your experience was a long time ago.’ Those were hurtful things to say to someone who was eminently qualified,” he says.

“After several months trying to get back into the tech world, I just threw up my hands and mentally told myself, I’m retired from high tech and will move on to bigger and better things.”

Mr Crum is now working for a non-profit and preparing to open a craft brewery. But he still resents the way he was treated by an industry obsessed with youth – and apparently immune to age discrimination laws.

When tech workers reach the grand old age of 45, they see the number of jobs they are offered drop, according to research by Hired, the tech recruitment platform. Salaries begin to fall aged 45, with candidates in their 50s and 60s asking for the same pay as millennials with just two years’ experience.

Laurie McCann, a senior attorney with the AARP, which advocates for older people’s rights in the United States, says ageism in the tech industry is a “very big problem”. Two-thirds of older tech workers say they have witnessed or experienced age discrimination at work, according to a 2013 survey by the organisation.

“People brag about how young the average age of their workforce is and say downright derogatory things to older people, almost like they are above the law,” she says. Silicon Valley has begun to face up to its gender and ethnic diversity issues, after scandals such as sexual harassment cases at Uber that contributed to the chief executive, Travis Kalanick, stepping aside in June.

But while many large tech companies publish reports on the proportion of their workforce that are women or minorities, hoping it will push them to improve their figures, they do not track age. Dan Lyons, who wrote a book, Disrupted, about his experience working at start-up HubSpot, says tech companies need to recognise the value of a “blended multigenerational workforce” and show how many older workers they employ in their diversity reports.

When he joined the start-up, which boasted its average age was 26, he was 52 and surprised by the “weird stereotypes” some of his younger colleagues seemed to have of older people. One called him grandpa. “I had this really big blog, I was internet famous, I had developed a TV show and worked in Hollywood, and they were like, ‘Wow, you can use Twitter?’” he recalls.

Experts have clear advice for tech companies looking to show they welcome older employees – or avoid future age discrimination lawsuits. Recruiters should end the practice of specifying the years when a candidate should have graduated from college or the need for a university email address, in effect making it clear they only expect to hire younger people. Seeking “digital natives” in job ads is problematic, because it implies someone grew up with the internet.

Once in the door, companies should retrain older staff as new coding languages emerge, educate them to recognise “unconscious bias” against older people, and host social activities that everyone feels welcome to participate in.

When Mr Lyons was at HubSpot, he felt he was walking a tightrope with his clothes. “You want to look casual, but you don’t want to look like a 50-year-old guy trying to dress like a 20-year-old,” he says.

He also urges older job hunters to delete everything on their resume before 2000, to avoid getting caught in automated filters that ignore applicants with that much experience.

At work, he believes older employees should avoid sounding “sanctimonious” and instead be humble and learn younger employees’ habits and favourite acronyms, such as DRI (directly responsible individual).

Chip Conley, a strategic adviser at Airbnb, was 52 when he was approached for the job – despite never having used the accommodation app. Having been chief executive of his own hotel chain for 24 years, he developed a role as a “modern elder”, serving as both mentor and intern.

“My best tactic was to reconceive my bewilderment as curiosity and give free rein to it,” he wrote in the Harvard Business Review.

Ashton Applewhite, author of This Chair Rocks: a Manifesto Against Ageism, says one of the reasons few age discrimination lawsuits are brought is people are reluctant to identify themselves as older.

“Age discrimination is often the first kind of discrimination that white men encounter in the workplace,” she says. “I’m really looking forward to those guys getting radicalised and joining the movement.” – (Copyright The Financial Times Limited 2017)