‘People will say: Athenry, that’s the crowd that stopped Apple’ 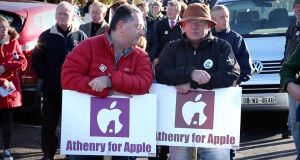 In November 2016 some 2,000 people demonstrated in favour of Apple’s plans to invest in Athenry.

Business leaders and politicians in Galway have reacted with anger at a move to push back until mid-October a court decision on plans by tech giant Apple to build an €850 million data centre in Athenry.

“It’s difficult to get across the sense of frustration of people in Athenry. We want this,” said Fine Gael councillor Peter Feeney.

“We’re worried that there’ll be reputational damage. People will say ‘Athenry, that’s the crowd that stopped Apple’. That’s the worry.”

Politicians in the Galway-West constituency are particularly concerned that the first phase of an Apple data centre in Denmark, announced at the same time as the Athenry site, is now complete.

If this was Dublin it would never get to this. If it’s west of the Shannon it seems to be put on the long finger

When the case involving the tech giant is heard in October, it will have been almost three years since Apple’s initial plan was announced. Mr Feeney, who has been in contact with the company throughout the process, says damage has been done to the region already as a result of the three-year wait.

“If this was Dublin it would never get to this. If it’s west of the Shannon it seems to be put on the long finger,” he said.

Mr Cronnelly supports the Apple investment as he expects other companies to set up shop in Athenry as a consequence. He also believes that small and medium enterprises could begin to pop up as a result of investment from the tech giant.

What is particularly disappointing for supporters of the project is that “the vast majority of the local community have support for it,” said Minister of State at the Department of Rural and Community Development Seán Kyne.

“It’s a billion euro investment, so you’ll have construction jobs and a good impact on local businesses as a result of construction,” he said.

Mr Kyne conceded that the delays carry a risk of reputational damage.

“It’s not helpful in terms of foreign direct investment so clearly we’re very hopeful that permission will effectively be granted in October,” he said.

When Apple first came across the Athenry site, it was “anxious to proceed”, Mr Feeney said.

“The site in Athenry was the best they’d ever seen in terms of climate, size and lack of impact on the environment.

“It was a sweet spot, as they called it, and they were very surprised it was still available,” he added.

“It’s deeply disappointing. It sends the wrong message when we’re trying to bring in foreign direct investment. Our members are deeply concerned because it’s not just this plant. This type of delay in obtaining planning permission for major investment affects a lot of our members. We have a lot of multinationals in Galway. They’re looking at their own future investments and question whether they’ll see the same type of delays,” he added.

Some 300 jobs are forecast to be created over multiple phases of construction and ongoing employment in the operation of the centre, including 150 long-term technical roles.

Should the project proceed it would be the single biggest private-sector investment in Connacht.