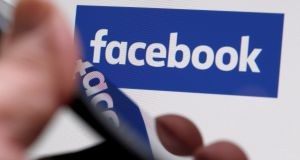 Facebook employs some 1,600 in its international headquarters in Dublin. Photograph: Reuters

Facebook crushed quarterly profit and revenue estimates on Wednesday as the social media giant’s push into video ads helped bolster its fast-growing mobile ad business. The company’s shares were up 1.4 per cent at $168 (€143) after the bell. Up to Wednesday’s close, the stock had climbed nearly 44 per cent this year.

Facebook said about 2.01 billion people were using its service monthly as of June 30th, up 17 per cent from a year earlier. The social media giant said in June it had surpassed the 2-billion-user mark. Mobile ad revenue accounted for 87 per cent of the company’s total advertising revenue of $9.16 billion in the latest quarter, up from 84 per cent a year earlier. Analysts on average had expected total ad revenue of $9.02 billion, according to data and analytics firm FactSet.

Facebook is expected to generate $36.29 billion in net digital ad revenue this year, a 35 per cent jump from 2016, according to research firm eMarketer.

Net income attributable to Facebook shareholders rose to $3.89 billion, or $1.32 per share, in the second quarter ended June 30th, from $2.28 billion, or 78 cents per share, a year earlier. Total revenue rose 44.8 per cent to $9.32 billion. Analysts on average had expected earnings of $1.13 per share and revenue of $9.20 billion, according to Thomson Reuters I/B/E/S.

In the first quarter, Facebook changed the method it reports earnings, focusing on Generally Accepted Accounting Principles (GAAP) earnings instead of non-GAAP.

Facebook employs some 1,600 at its international headquarters in Dublin, and recently took additional office space in the capital. It is also developing a data centre in Co Meath, and its subsidiary WhatsApp is establishing a small team within Facebook’s Dublin offices to support its customer support team.