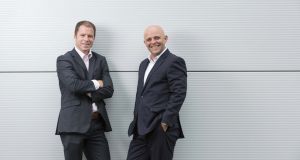 Liam Tracey, director of GoldStar Telecom, with Anthony Tattan, commercial director of IP Telecom. All GoldStar customers will see their phone systems operate through the cloud as a result of its dealings with IP Telecom

Dublin-based IP Telecom has signed a wholesale deal with Cork-based GoldStar Telecom worth €500,000.

Founded in 2010, IP Telecom is a voice over internet protocol (VoIP) provider to SMEs and larger enterprises. Essentially, the company offers phone systems that are based in the cloud as opposed to the conventional line-based systems.

This is both cheaper than phone line systems that currently operate and helps to future proof a business, according to Anthony Tattan, the commercial director of IP Telecom.

With the cloud-based system, companies are paying for software. When that software ages, the company can replace or update it throughout its network. With line rental, each line must be fixed or updated individually.

With more than 20,000 network end points across thousands of businesses in Ireland, IP Telecom has invested significantly in developing its own cloud based telephone system to ensure it can provide excellent call quality.

GoldStar Telecom is the sole Irish distributor for LG Ericsson phones and works with SMEs, hotels, hospitals and call centres, catering for companies with up to 2,400 users.

All GoldStar customers will see their phone systems operate through the cloud as a result of its dealings with IP Telecom.

Liam Tracey, the director of GoldStar Telecom, said he had continued his company’s partnership with IP Telecom due to their expertise in cloud based solutions.

“We are dealing with the people that have designed, planned and implemented the solutions we’re deploying. Having that level of expertise and backup is essential when delivering mission critical voice solutions,” he said.

Commenting on the deal, Mr Tattan said, “[Goldstar] have been advocates of IP Telecom since 2012 and our partnership is based strongly on very similar work ethics and practices. Support and customer experience are paramount to both organisations and we look forward to many more years working together.”

IP Telecom have been in expansion mode this year. The company signed a similar deal in March worth €1.5 million with Waterford-based Radius Technologies. It also invested €500,000 in its own infrastructure when it completed deployment of point of presence architecture – an access point from one place to the rest of the internet – into the BT data centre in Citywest.

Mr Tattan told The Irish Times the company planned to hire 15 staff over the next 18 months as it moves into a new headquarters in Park West. In addition, the group’s own broadband offering will be launched later this year through the Eir wholesale channel.