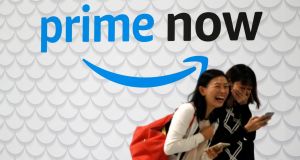 Using the Prime Now app, customers in Singapore can get tens of thousands of items. Photograph: Reuters

Amazon’s entry into Southeast Asia has been marred by a delivery problem.

After introducing its Prime Now two-hour delivery service to Singapore on Thursday, the company now is unable to deliver goods to customers.

As of Friday afternoon, its Prime Now app was telling users that “delivery is currently sold out. Check back soon”.

The service appeared to go down hours after its official launch on Thursday, according to media reports.

Amazon kicked off in Singapore this week with its most aggressive service yet. Using the Prime Now app, customers there can get tens of thousands of items – everything from chilled Tiger beer to Samsung mobile phones – delivered to their door with free delivery on orders of more than $29.

The service is available as a free trial for a limited time in Singapore, before the company rolls out its Prime membership programme.

The US ecommerce giant’s first venture into Southeast Asia could spark fierce competition with the Alibaba Group, which has acquired control of Lazada Group and is said to be considering an investment in Indonesia’s PT Tokopedia.

The region of 620 million people is home to an ecommerce market forecast to reach $88 billion by 2025, according to a report by Google and Temasek Holdings.

1 Direct sea routes to Europe offer certainty in choppy Brexit waters
2 Ten of the most mysterious aircraft disappearances
3 Admission of mistake in Oxford vaccine dose raises doubts over reliability
4 Anti-alcohol zeal of public health experts peppers reopening debate
5 There was no vaccine for Anglo: Why the last crisis was different
Real news has value SUBSCRIBE