Wild Geese: A 'gap year' in Spain at 45 led John Keogh to a new career as a walking guide 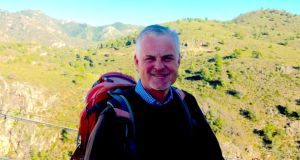 John Keogh: “Nobody was offering this in southern Spain, so I did.”

John Keogh and his wife, Christine, visited the pretty-as-a-picture Spanish town of Frigiliana while on a driving holiday in Andalusia in 2007.

“I recognised the town’s name from the lyrics of the great Christy Moore song about Lisdoonvarna,” Keogh says. “‘The summer comes around each year and we go there and they come here. Some jet off to Frigiliana but I head down to Lisdoonvarna.’ And two years later we were living here. At 45, I took a gap year, went to school and learned Spanish and spent all my free time walking the mountains.”

“I applied for an active tourism licence to bring walkers into the Sierra Almijara protected natural park,” Keogh says. “The process was quick, simple and cheap and, by September 2010, I was ready to open.”

Keogh had worked previously in his family’s furniture business and had also been a travel agent for 12 years. He says his combination of selling skills and travel-agency experience transferred well to his new venture and that it has been relatively easy to run a business in Spain – apart from mastering the complexities of corporate taxation.

“I’m fairly proficient in Irish tax affairs but the Spanish system is beyond me,” Keogh says. “I use a gestor financial adviser [someone who deals with Spanish administrative bureaucracy on behalf of a client] for my tax returns and anything to do with the upkeep of my accounts. It’s cheap and means far less worry for me.

“I’m ‘autonimo’ [self-employed], so it’s a monthly up-front payment of €300 for social security followed by income tax, VAT and the cost of an accountant. It’s not really SME-friendly but it’s the same for everyone and you just get on with it. If you have quiet months, you can ‘close’ your business and reopen it when things pick up again. A quick visit to the accountant sorts it out. Very handy in July and August when it’s too hot to hike.”

Keogh’s business is split between group walking holidays and day walks and runs for 10 months of the year. “Although it’s physically demanding, it’s often said that even a bad day in the mountains is still better than a great day in the office,” he says.

“The business broke even in year one, so we used our savings to keep us going then. But by year two it was holding its own and making enough to give me some hope of eventual success. Now it’s doing quite well and the name has become established.

“The hill-walking community is fairly small and they all talk to each other about their experiences abroad. There are many people who want to go on a holiday and have a few walks. This is subtly different to a walking holiday.”

When Keogh started his business, the day walks were something to keep him busy and fit between group bookings. Now, however, they account for about half of his turnover.

The day walks are similar to An Óige’s Sunday hikes with which Keogh was familiar from home. “You turn up at 9am, board the bus, pay your money and off you go. It’s simple and it’s popular.

“Nobody was offering this in southern Spain, so I did,” he says. “For the first six months I probably had no more than one customer per day, if even that. By the end of year two I had bookings every day. I also picked up a contract with a British walking holidays tour operator, Preferred Travel Services, and they send me groups every year.”

Keogh is based in a rural area of southern Spain where the business culture is relaxed. “A handshake and word of mouth are sufficient mostly,” he says. “Small businesses here are very tech-savvy and I interact a lot with hotels and transport companies and find them very efficient and switched on.”

Unsurprisingly, Keogh says it’s the weather that’s the most appealing part of living in Spain.

“I’m an Irish weather refugee and I’m only half joking when I say that. When you wake in the morning and pull back the curtains and the sky is blue and the sun is shining, everything seems a little easier. It’s psychological, of course, but it works.

“What I also like about living here is the interaction with so many different foreign nationals. The Costa del Sol is like a microcosm of the European Union with dozens of different nationalities living side by side, doing business, making friends, learning about each other’s culture.”

Asked about job opportunities for Irish people in the region, Keogh says there are openings for those who can offer services to older people, as southern Spain is a place to which many retire.

“Nursing homes and property management are certainly two areas and having English is a great advantage. However, speaking Spanish is a huge boost and helped me integrate much more,” he says. “Tourism is the big industry here but it’s extremely competitive and the average salary is far, far lower than in Ireland. But the quality of life is really good, so it’s a trade-off.”