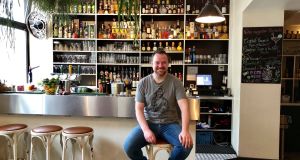 When you envisage the “heart” of Europe, Luxembourg, with its twee reputation and tiny population may not immediately spring to mind.

But it stole the heart of Irishman Ray Hickey, who has spent the past 25 years enjoying its multicultural diversity and top of the range hospitality.

“I arrived here in June 1993. Europe was buzzing at the time. Ireland was amazing and the Tiger was merely a glint in people’s eye. I had spent the past summers travelling around Greece and Egypt after finishing school and was just enjoying being young,” he says.

Hickey was originally meant to stay for two weeks, but a random opening in a restaurant kitchen lead to a career and a life-changing opportunity.

“Someone in the kitchen of a restaurant I frequented took ill, so I took over for the day. I was offered a job that night and, as the saying goes, I’ve never looked back,” he says.

One year later, in 1994, Hickey bought 10 per cent of the restaurant. By 1995, he had built a sufficient rapport with his bank that it partially supported the rest of his purchase. Throughout the rest of the 1990s, he established relationships with breweries, who controlled rental contracts.

The duo found their niche and over the coming years were to grow their business, despite very little experience in the restaurant and bar trade.

“Our next venture was a 250-seater restaurant in 2008, followed by a Mexican eatery in the city centre in 2013 and three further restaurants and bars in 2016 – all in and around the centre of Luxembourg,” he said.

“Now we are running six successful eateries, several commercial properties and two Airbnbs in the walled city,” says Hickey, who is planning on expanding the business and property profile further.

Along the way, Hickey (45) got married and had three children.

“I’m here for the long haul now. That’s it for me. It’s an unlikely destination, but I love it here.”

“We haven’t experienced any difficult, traumatic times since opening, thank god. This is a very wealthy and healthy place to live and work. It wasn’t affected by the global crisis in 2007 so it’s been a steady bet.”

Home to just over 500,000 people, the Grand Duchy of Luxembourg attracts many highly skilled workers from its bordering countries France, Germany and Belgium. A founding member of the EU, it has metamorphosed from a rural backwater to a cosmopolitan centre, with access to a massive European market.

According to Hickey, the Irish community is thriving.

“Luxembourg is a world renowned financial centre, so lots of Irish people work in banks and financial institutions. The country is very pro-business, and also has a very high standard of living. The fact that there is such a large banking community mean customers are used to high standards, so you have to be good to survive.”

On the downside, prices are high, Hickey says.

“Salaries are definitely higher here – at least 40 per cent higher. People don’t struggle as they do in Ireland. Taxes are low on luxury products and alcohol – there’s a 17 percent tax on booze.”

In terms of language barriers, people are often fooled into thinking French is the national tongue, he says.

“Most people think they speak French and German here, but the most predominant language is Luxembourgish. It’s a west Germanic language spoken by about 390,000 people. I speak French and English, but I’m making a concerted effort to learn it now after a quarter of a century here.”

There are lots of networks, business and social, so settling in shouldn’t be a problem

Hickey says he and his family come home a few times a year, making the most of direct flights.

“It’s very close to Ireland, which is great for family occasions. Though Luxembourg has a reputation as a boring place, it’s not this grey Eurocratic enclave people think it is.

The Irish in Luxembourg are like a fishhook, Hickey jokes. “They get their claws into you when you arrive, and keep you here no matter what.

“There are lots of networks, business and social, so settling in shouldn’t be a problem. If someone wants to come over here from Ireland, I’ll be there at the airport with a bottle of champagne and open arms awaiting them. I mean it. Do come, you may be in for a pleasant surprise.”