Wild Geese: Carina Devlin and her family have been living in the UAE since 2008 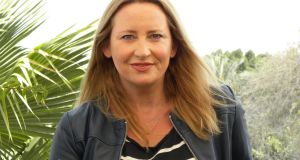 Carina Devlin: “It gets so roasting hot in the summer months, so we head back to Ireland to our mobile home to get away from the stifling heat.”

For Carina Devlin and her family, 2008 marked a turning point. The recession was hitting Ireland and gradually insinuating itself into people’s lives.

“My husband, a construction engineer, saw projects across the country dry up. So he took up a contract in Abu Dhabi in the United Arab Emirates and we packed our bags and moved to the Emirati capital with our two young kids,” she says.

Despite being Dubai’s lesser known little sister, Abu Dhabi is an oil-producing metropolis, attracting expats from across the globe, looking to fuel up on high salaries and zero income taxes.

“I had lived in the Middle East before, in the early 1990s, when I worked with Royal Jordanian Airlines as an air hostess. I was based in Amman, but travelled widely across the region so it was interesting that I was drawn back here again,” she says.

You can’t just move to the UAE without being sponsored. Devlin, who was working previously in Dublin as a recruitment director, was happy to piggyback on her husband’s sponsorship and try something new. “Initially we only planned to stay two years, but here we are, 10 years later and counting.”

Getting the children settled and into school and Montessori was a priority at first, before she started teaching business English. “It was great as it wasn’t full time and I was meeting interesting people and getting to know the culture of the place.”

A meeting with a friend and fellow Irish expat, Briona Corrigan, a creative trainer and ex-singer with 90s band The Beautiful South led to a joint venture, The Creative Train, a business-training company that delivers interactive solutions via games and tasks.

In 2016, the company got a business licence through one of the UAE’s many “free zones” which aim to give entrepreneurs and small businesses a simpler way to set up in the region. The licence has to be renewed every year.

“Essentially the free zone offers you 100 per cent company ownership without the need for local sponsorship, which is fantastic,” she says.

“We offer bespoke tailor-made training and workshops for businesses in the UAE and around the world. We merged our far-reaching knowledge across the training sector and our creative elements together to bring something different to the table.”

Devlin says the company hit the ground running after it procured a large contract from a South African global entertainment and internet company, one of the largest technology investors in the world after creating a “Storytelling for Business” workshop. “It was specifically tailored to suit the needs of the company, and we delivered it in South Africa, Brazil, India, Poland and Holland.”

“Storytelling” enables you to present information in a more interesting way, she says. “It is the greatest technology we have and the basis for how we interact and communicate.”

A recent Stanford University survey found that statistics combined with stories have a retention rate of 65 to 70 per cent. “Hence its a highly effective way of making sums or statistics easier to digest and keeps business, who invest in storytelling workshops ahead of the pack.”

The Creative Train holds workshops for corporates in hotels or conference halls around Abu Dhabi and beyond. “We have an office space outside Abu Dhabi in the ‘free zone’, though we mostly work from home or coffee shops, which is great when you have a family,” she says.

And although the company is young, Devlin says it has big plans. “We want to look at ways to help women feel empowered and exceed their executive potential and to encourage more female representation at high levels, which is good for everyone.

“It’s an exciting time for us and we are passionate about creative training with innovative companies. We are currently preparing workshops for some major companies here in the UAE to be delivered in the coming months and would love to increase our profile in Ireland and elsewhere.”

Devlin says the family enjoys a fabulous life in Abu Dhabi. “There’s lots of outdoor sports, beach life and great kids activities – and being so far from home, the friendships you forge here are really strong.”

She and her family also enjoy the fruits of the vibrant Irish and international community. “In 2008 when we arrived, there was a massive influx of expats from across the world which drove up rental prices for quite a few years but it has steadied a little in recent times, though it is still expensive.”

For anyone thinking of moving to Abu Dhabi, Devlin warns that it is a very transient place. “You can’t emigrate here forever because you need sponsorship, so you’ll always be an expat.”

People also need to be aware of the culture in the Middle East and how easily you can offend people unknowingly. “So do familiarise yourself with local customs – both formal and informal.”

And while you mightn’t pay taxes on your income in Abu Dhabi, costs are high. “We pay €40,000 a year per house. Schools are €20,000 per year. Recently a 5 per cent VAT rate has been introduced on goods and services.”

Main courses cost around €25 and drinks don’t come cheap in the many bars and clubs. “It also gets so roasting hot in the summer months, so we head back to Ireland to our mobile home to get away from the stifling heat.

“If you decide to move here, you might want to plan a little escape here and there.”