Pilita Clark: Why don’t more deputies get a shot at the top job? 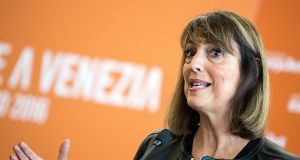 Carolyn McCall: when she left after seven years as chief executive of EasyJet the company’s share price had quadrupled

Which chief executive wrote this last week: “There is no such thing as a free lunch. We will have to fight to succeed, and my team and I are ready to do so. Because it’s worth it!”

I doubt it will help much if I tell you it was the boss of one of the world’s biggest banks because the words came from Christian Sewing, Deutsche Bank’s new CEO, in a message he sent to staff about his appointment on Monday.

Outside banking circles Sewing is not a big name in his native Germany, let alone anywhere else. He joined Deutsche as a teenager in 1989, and has been quietly plugging away there for all but two years ever since.

I have no idea if he will be the answer to the bank’s plummeting share price or years of annual losses. But I rather hope he will be because Sewing – formerly one of Deutsche’s deputy chief executives – is an example of something you do not see every day: a deputy who got the top job.

I am biased because although I have never had a job remotely as important as any of Sewing’s, I have been a serial deputy, most recently this paper’s deputy news editor. And, as is well known, this is often an excellent way to make sure you do a lot of thankless work and never get the boss’s job.

In my case, this was not a problem. I am rarely gripped by the urge to run anything, and have mostly been a deputy to pleasant, hard-working people who made their offsider’s life easy.

At the same time I decided I never wanted another job with the word “deputy” in the title. I agree with Richard Hytner, one of the few people to have written a book (Consiglieri) about the under-studied role of the sidekick. When people hear the word “number two”, he says, they often think “also-ran, loser, couldn’t hack it as number one”.

And in my experience they do. It was no surprise to see a survey last year showing the number of deputy chief executives in the 100 largest UK companies had dwindled to zero. Even deputies themselves dislike the title. Two friends of mine who recently became a number two did something smart I wish I had thought of. They insisted on being called an “executive” so-and-so rather than a deputy.

Hytner, a former deputy chairman of the Saatchi & Saatchi advertising group, thinks the deputy’s sorry reputation is unfair. Support acts are often happy to be number two, and play a vital role in their organisations that he thinks deserves more recognition.

I agree, but I am more interested in why deputies are so often passed over for the top job in favour of an outsider or thrusting insider.

This is annoying for several reasons. First, the deputy usually has a proven record of running an organisation because they often have to do it when the boss is busy or away. They also usually do this without one of the big advantages the boss has: a deputy.

Promoting people to be a deputy is also a helpful way to groom talented staff and create a pool of potential leaders who can be considered alongside outside candidates when a new chief is needed.

These number twos have one big advantage over external hires: they are a known quantity. Outsiders who look terrific on paper and have stellar records elsewhere are not guaranteed the same success in new organisations. The corporate landscape is littered with examples of high-fliers raided from rival organisations who falter.

Few fell to ground as quickly as John Browett, the former boss of the Dixons electronics chain who lasted less than a year as Apple’s head of retail. But they can be just as disruptive.

This is no argument against the often excellent outside hire. Carolyn McCall, the former boss of the Guardian Media Group, was dismissed as a media luvvie when she was picked to run EasyJet in 2010. By the time she left seven years later the company’s share price had quadrupled, and its passenger numbers had soared to records.

There are plenty of other examples like her. Would deputies have ever done as well? It is impossible to say because, as is so often the case, they never got the chance to lead. – Copyright The Financial Times Limited 2018