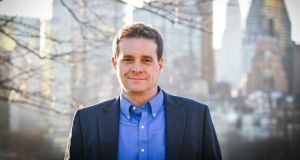 Conall McGonagle: “What’s amazing in New York is the scale and the speed of things.”

Moving to a new city to start a new job might look glamorous. However, very often career moves come at a price, especially if there are partners and children involved. For Conall McGonagle and his wife Dr Róisín O’Cearbhaill, their respective job moves involved a seven-month separation while O’Cearbhaill went to New York with their then one-year-old son to work and continue her training in medical oncology and McGonagle stayed behind in Brussels waiting for his work visa to come through.

Nine years later, the family of five is now happily settled in the United States, where McGonagle (39) is chief operating officer with KBC Bank USA.

A Galway native, McGonagle studied commerce and French at NUI Galway and has a masters in accounting from the Smurfit Graduate Business School. He spent six years in auditing with KPMG in Dublin, Luxembourg and Chicago, followed by a brief stint with a fintech start-up (that ran out of funding due to the global credit crisis), before joining KBC in 2008.

He worked first in risk management with the bank in Dublin before moving to Brussels for training in internal audit. In 2009, he transferred to KBC’s offices in New York as director of internal audit. He became chief risk officer three years later and chief operating officer last August.

McGonagle found it easy to settle into the US business environment. “Overall it’s quite similar to Ireland but sometimes the discussions are more direct,” he says. “People expect to speak to you directly in order to tell you what they want and to hear your reaction. There are also a lot of regulations in the USA, so it takes some time to learn them and keep updated.”

“What’s amazing in New York is the scale and the speed of things,” he says. “There is such a vast number of people, companies, solution providers, networks and events happening all the time. Whatever you are interested in, it’s happening and you can get involved.”

KBC’s business in the US is focused on the corporate sector and it provides services to US companies setting up in Europe and vice versa. McGonagle is very active in the New York chapter of the Association of Chartered Accountants in the USA (ACAUS) and has been its president since early 2017.

“You meet a lot of interesting people from many countries at our networking events and we also organise discussion panels on trends affecting our industry from blockchain to artificial intelligence to big data,” he says.

“As president I am focused on working with the global accountancy institutes that fund ACAUS to grow it and support their members in the US. The accounting profession and the nature of our work is changing as processes become more automated.

“It will still be important to have a grounding in business and finance but we need to be open to change and to respond to it with lifelong learning. There are new disruptions coming down the tracks and this is changing the focus on what skills will be required as part of the accountancy qualification in the future. Banking/accounting is exciting right now with a lot of focus on innovation and digitalisation.”

Asked about opportunities for Irish people in the US at present, McGonagle says: “Often the challenge is how to stay in the USA for more than a few years due to visa requirements.”

“The chartered accountant qualification is a good career path as it is recognised internationally,” he says, “and the finance skills are easily transferrable to other countries. Chartered Accountants Ireland have a mutual recognition agreement with the Certified Public Accountants (CPA) in the USA, so instead of doing four exams to become a CPA in the USA, an Irish chartered accountant only has to do one. I meet a lot of Irish accountants who have moved to the USA and have successful careers in both accounting and non-accounting roles.

“My advice to anyone coming here is to tap into the networks in New York. They are a great way to meet a lot of people quickly and to get advice and there are many Irish-American networks operating here that cover all aspects of business including start-ups.”

McGonagle runs to stay fit and takes part in the New York marathon each year for charity. He also plays soccer with friends and coaches his kids’ soccer teams.

“We like living in the US and people are very friendly and welcoming,” he says. “There is also a lot of choice and diversity although sometimes the amount of choice is overwhelming.

“What’s very different for us is living in a city in an apartment with no garden, but there is a lot of open green space around us for sports and for the kids to play and we have a cable car that brings us right into Manhattan.”

Asked if the new Trump administration has had an impact on his working life McGonagle says it has not.

“The main impact is the recent tax reform and everyone is waiting to see what will come next. There is talk of deregulation, for example, but not much happening. To be honest, there are so many people in New York and so much diversity and things going on that society here has its own momentum and life pretty much carries on regardless.”