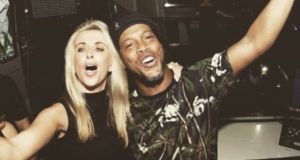 Sarah Lucey is the butcher’s daughter from Mallow who now works as director of talent management for Miami’s two most exclusive nightclubs.

Seven years after arriving in the nightlife capital of the world, with no contacts and no place to stay, she is taking care of the world’s biggest A-list celebrities on a weekly basis.

Her personality and ability to multi-task under pressure have seen her fly up the ranks in LIV and STORY – two of the US’s biggest nightclubs – and she wants more Irish people to capitalise on their talent in her industry and while abroad in general.

“I’m dealing with Kim Kardashian, Rihanna, Nicki Minaj, all these amazing women. I remember one night walking into our club, one of the A-list celebrities complimented me on my top,” explains the 32 year-old. “And I immediately, and it’s so Irish, I said ‘Oh thanks but I got it in Penneys’. And I remember she caught my hand and said, ‘Darling take the compliment and never put yourself down’.

“I learned a lot that day. You’re never going to be on a par, to be around these huge people, if you don’t believe in yourself. There’s no reason that the Irish can’t be as good or better than everyone else. But if you can’t take yourself seriously, nobody else will.”

In 2009, the Cork woman added a masters in marketing from the Smurfit School to her UCC commerce degree, before working as marketing manager in Karma and the Skeff in Galway city.

She first came to Miami in 2011 and after a brief stint in Ibiza’s popular open air club Ushuaïa, worked her way through various production roles to director of talent management.

“If one of our clubs books somebody like David Guetta, Calvin Harris, or you have somebody in town – Leonardo DiCaprio or David Beckham or one of these people – when they step foot in Miami, it’s my job to take care of them,” says Lucey.

“Hotels, cars, restaurants, security and just making sure they’re comfortable. I would be a liaison between them and the club. So if you had Drake performing, you would check his private jet, you would make sure he’s happy when he comes to the club and just make sure it’s extremely smooth for him and his team. I do that weekly.

“It’s just about being relaxed, as you don’t want to stress them out. And you just want to be a nice person to them. You need to be humble and you need to be on point and professional.

“And I think that’s why the Irish can do well here and abroad, because we’re warm and we’re a good judge of character and we’re intuitive. People like to talk to us.”

The Cork native is able to mix that warmth with a ruthless streak that allows her to speak up and call the shots among some of the wealthiest and most famous people in the world.

“I got here through research, persistence, drive and discipline. I would study the big boys in the game and I would find out where they were and I would make it my business to bump into them, constantly. I wouldn’t give up until they gave me the opportunity.

“I mean some days I didn’t want to get out of bed and go looking for these guys at 6am in the morning, but they’d turn around and there she is again. The annoying one from Cork.”

Clubs like LIV and STORY sell their tables on a night from anything between $1,000 (€800) and $100,000 (€80,000). Patrons are willing to spend that in order to hear the world’s biggest DJs, to rub shoulders with celebrities and to experience a live production that goes far beyond your regular nightclub experience. It’s a world away from her native Mallow.

“Our butchers [Luceys Butchers] has been there since 1880, for five generations. It’s in Mallow on the main street and it’s a three-storey building where my dad grew up with his 10 brothers and sisters on the third floor.

“I would’ve been thrown into the shop when I was five or six years old. I could be selling a piece of lamb in the butchers or I’m selling this big $100,000 table here. It’s all the same, selling.

“An old woman might be lonely and she wants to come in for a talk, to the butchers. It all translates into what I’m doing now. Being on your toes, front of house.

I’m not going to have kids here and buy a dog. I’m in Miami for business, but I absolutely love it every single day

“Now my brother, even though he has the opportunity to live somewhere else, he wants to raise his two little boys on the third floor. Because that’s just in our blood. We’re butchers and they can smell stuff coming up, they can smell the turkeys and they can hear the chefs going in at 6am.

“It was my first Christmas home in seven years this year - my family kind of looked at me and went ‘hey’, and then went back to the shop. I was only home for three days, but nobody in there says ‘oh my God you were with Kim Kardashian last week’. It’s like ‘Sarah, put on gloves and clean out a turkey’ . . . ‘copy got it.’”

On a night in one of her clubs she is all at once entertaining guests and acts, managing performers and the DJ booth, updating five Instagram accounts and maintaining constant communication with her team via several Whatsppp groups. Always aware but never stressing.

“So we would have KOMODO and PLANTA restaurant, LIV nightclub, STORY nightclub, and within those four teams we would have different Whatsapp group chats. We do everything on Whatsapp, it’s cleaner. And everything, everything is communication here. Because you don’t want to be embarrassed when Jennifer Lopez says ‘I’m looking for water Sarah where is it’. ‘Oh nobody told me’, nobody told me doesn’t fly here. It’s your job to be aware and you don’t pass the blame to anyone else.

"I think Instagram only allows me to manage five accounts at a time because I tried to add more. So if the DJ - let’s say Steve Aoki is playing on Saturday night at LIV - but he’s at dinner with me on Friday, I would change my Instagram account to the LIV one and get him to say something. So even though I’m sitting down relaxed, everything is in real time. There’s no - 'oh ill post that tomorrow'. And especially in nightlife there’s probably a three hour window where it’s just go, go, go and you sleep when you sleep.”

Lucey is full of gratitude for the opportunities afforded to her by first boss, John Callanan in Galway, and her current boss, “marketing genius” David Grutman.

She recalls a motivational speaker who asked her Smurfit class to each fold a piece of paper in half. Write on one side what you’re good at, and on the other what you like doing. Crisscross them and from that decipher your career path. She has made that dream a reality, though she’s still Mallow at heart.

“My husband is French and he works with me in the nightclub – he’s the director of lights and sounds. It’s great to have someone there, a rock to lean on. But he loves Ireland and we bought a house there and he eventually wants to be an Irish farmer, even though he’s French,” she laughs.

“I’m not in Miami for the fun of it, I’m not here because I’ve loads of family and friends. I’m here specifically for the industry, the experience. I’m not going to have kids here and buy a dog. I’m in Miami for business, but I absolutely love it every single day.”