Will Ireland still offer value for money for tourists in 2019?

Our tourism sector insists it is still competitive, but it is facing a year of dramatic change 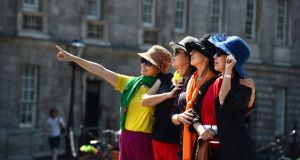 The one thing that virtually everyone involved in the Irish tourism industry appears to agree on is that a trip to Ireland still represents good value for money.

Irish residents might be forgiven for arching an eyebrow at such sentiments. However, despite local beliefs about the costs of restaurants, pubs, hotels and all the rest, the mantra from the tourism authorities is the same – Ireland is a premium destination, but one that is still competitively priced.

By and large, many of the millions of tourists who have come here in the last few years appear to agree with this assertion, but the tourism sector remains keenly aware that things could change quickly.

There is much anxiety that external factors such as Brexit and US president Donald Trump’s trade wars, along with domestic issues such as rising wage costs and the 4.5 per cent jump in the VAT rate, will upset the balance.

As it stands, recent figures show that, when asked to rate Ireland in value for money terms, more than two-thirds of visitors from the US rated Ireland as either good or very good value, with just 4 per cent believing it to be poor or very poor value.

We do find that Dublin, for example, is more expensive than competitor cities like Barcelona, Amsterdam, and Copenhagen

Tourists from Germany and France appear similarly impressed. Just 11 per cent and 9 per cent of them respectively scored Ireland poorly for value, and those numbers have stayed pretty consistent over the last five years.

When it comes to tourists coming from Britain, however, the numbers paint a somewhat different picture.

The number of tourists from there ranking Ireland most unfavourably in terms of value for money has climbed to 14 per cent, with 44 per cent now rating it as good or very good value for money, down from a peak of 55 per cent in 2015.

Sterling’s weakness holds much of the blame. Since April 2017, based on exchange rates alone, the cost of accommodation for a British tourist has increased by £15 (about €17), or 5 per cent.

Many British tourists could thus be forgiven for looking to cheaper destinations closer to home when it comes to spending their money – a habit that could be further fuelled by Brexit tempers after the UK leaves the EU in March.

“Value for money is the watchword as we head into 2019. We have to watch, particularly in urban areas, that we don’t get ahead of our competitors. We do find that Dublin, for example, is more expensive than competitor cities like Barcelona, Amsterdam, and Copenhagen, and we have to be very mindful because we’ll lose market share very quickly,” said the head of Tourism Ireland, Niall Gibbons, late last year.

His concerns are echoed by his counterpart in Fáilte Ireland, Paul Kelly. “Our value for money ratings were at an all-time high in 2015 and we’ve dropped back to where we were in 2013,” he said. “Overall when we talk to international buyers we’re not as good value as we were but we’re still pretty good value.”

He stresses that Ireland is neither a low-cost economy or a low-cost tourism destination, but that it is “a premium offering . . . So people are prepared to pay a little bit more for it. We were excellent value. But we’re still pretty good value.”

One thing that looks certain to drive prices up in the months ahead and impact on Ireland’s value for money is the restoration of the VAT rate for the hospitality sector to 13.5 per cent. Prices are already climbing in cafes, restaurants and hotels following the move.

The VAT rate for the sector was cut to 9 per cent in 2011 as the government of the day sought to protect tourism from the worst ravages of the economic collapse. It came at a total cost of €2.7 billion over seven years.

With the tourism sector booming last year, Minister for Finance Paschal Donohoe announced that the full rate was being restored, saying the move would bring €466 million in.

For every per cent sterling weakens, Ireland becomes more expensive, while our competitors in the market, places like Scotland, become cheaper

But at what price? The industry has argued – unsuccessfully thus far – that the lower VAT rate has been a key factor in boosting overseas tourist numbers, and it credits the measure with creating 80,000 new jobs.

That is only partly true. While the VAT move did keep struggling tourism enterprises going during the recession and helped others cut prices, or at least boost margins, the impact of a strong dollar against the euro has done more to bring more Americans here.

“Like everyone in the tourism industry we would have preferred to see that lower level retained, but you know the Government has to balance its books and has to make whatever decisions it is elected to make,” Mr Kelly said.

He suggests that prices won’t climb by as much as some people say, and points out that in 2011 when the VAT rate went down about half of the cut was passed on in pricing, with the rest absorbed.

Adrian Cummins of the Restaurants Association of Ireland is also acutely aware of the importance of pricing in keeping tourism numbers up. He says that tourism numbers “are brilliant and you can’t be negative about them, but things could change rapidly”. He says the VAT hike in particular will give people “a real shock”.

He also points to the rising cost of energy – up about 10 per cent – and insurance premiums, which have climbed by the same amount. He says labour costs and the increased minimum wage have put pressure on competitiveness.

“I am afraid we are getting back to the bad old days and our members are very fearful of what lies ahead,” he said.

He believes the Government needs to act to reduce the cost of insurance, reverse its decision on VAT across the hospitality sector and push to lower local authority charges. But he is not optimistic. “I see this arrogance in Government and I see a two-tiered tourism sector, one in Dublin which is doing very well and then the regions which are really struggling.”

Eoghan O’Mara Walsh of the Irish Tourism Industry Confederation points to Brexit uncertainty and a weakening sterling as having the biggest impact on Ireland’s value for money. “For every per cent sterling weakens, Ireland becomes more expensive, while our competitors in the market, places like Scotland, become cheaper.”

He describes the timing of the VAT changes as “really bad and we would like to see the hike deferred even for 12 months, but maybe that ship has already sailed”.

He believes tourism has been “taken for granted by Government and not looked at as the engine [for] growth and development it is”, pointing to the Centre Parcs which will open in Co Longford this summer as an example of its potency. By any measure that new centre is a remarkable story.

“It is going to employ around 1,000 people full time and . . . is a very concrete example of how tourism can benefit our region, but it is taken for granted. Many areas of tourism are.”