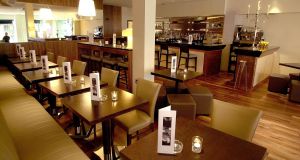 Department of Finance said 9% VAT rate for hotels and restaurants had always been intended as temporary. Photograph: David Sleator

Ending the special discounted VAT rate for hotels and restaurants would have a minimal impact on members of the public, Minister for Finance Paschal Donohoe was told.

Plans to try and charge higher rates of VAT in Dublin and other tourist hotspots were also shot down, according to an internal submission prepared for the Minister by Department of Finance officials.

The controversial 9 per cent rate had been introduced as a temporary measure in 2011. By the end of 2017, it had cost the Exchequer an estimated €2.6 billion.

However, moves to restore it to its original 13.5 per cent rate met opposition from the hotel and restaurant industries.

In a submission prepared for Mr Donohoe, officials said the special rate had been introduced to create jobs and “on condition that prices remain competitive”. The sectors benefitting were no longer considered competitive and the department believed an increase in the rate would have little to no impact on employment.

It said the lower rate was particularly hard to defend for the tourism industry. “The tourism sector is more responsive to income levels than price,” it said. “There is less relevance and justification for applying a low VAT rate to these sectors.”

Suggestions had been made that the special rate could be kept in certain parts of the State but not others, particularly in Dublin where hotels were charging high rates.

The submission said however: “It was pointed out that the VAT directive did not allow for regional disparities in the operation of the VAT system, nor did it allow for different rates in respect of what is effectively the same service.”

Officials said an economic report raising questions over retention of the 9 per cent VAT rate could be published to back up the department’s decision to abolish the rate.

In a note, Mr Donohoe wrote: “As this report makes clear these are not my views or the views of the Government. Will be a helpful contribution to approaching debate.”

The impact of an increase in the rate – even if every cent was passed on to the customer – would be minimal, the submission also said. An item costing €3 would increase to €3.12. A €10 meal including a soft drink would end up 33 cent more expensive, while a €50 dinner with a €10 bottle of wine would only go up to €51.65.

The Minister was given options around increasing or decreasing general VAT rates, with a one percentage point rise in all rates yielding more than €800 million annually.

No changes were made to the two main rates of 13.5 and 23 per cent that apply to most goods.

Mr Donohoe was also advised that abolition of the special 9 per cent rate could bring in extra revenue of €598 million a year.

In a statement, the Department of Finance said the 9 per cent VAT rate had always been intended as temporary and its removal came because of a “decline in competitiveness”.

They said it had limited benefit relative to its cost and that the International Monetary Fund, OECD, and EU had all recommended either its abolition or a review of it.

“Tourism expenditure is more sensitive to income growth and the economic cycle than price changes, which reduces the relevance of the VAT rate applying to the sector.”