Ryanair hits headwinds in 2018, but is still well placed to grow

Strikes, a profit warning and calls for board changes made 2018 a difficult year for the airline 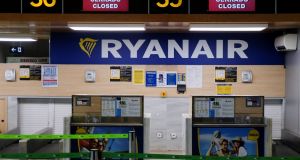 The new year will mark Michael O’Leary’s 25th anniversary as chief executive of Ryanair. It’s been a transformational period during which he has led the company from struggling upstart to Europe’s biggest airline, flying some 135 million people a year around the continent.

His five-year contract with the company ends in 2019. O’Leary said three months ago that he still enjoyed the job, and wanted to stay on as over the next five years Ryanair takes delivery of 200 Boeing 737 Max-8 200s, a slightly larger craft the airline helped design, which will expand its fleet to 520 and could bring passenger numbers closer to 200 million.

The only change that O’Leary might seek is a switch back to the rolling 12-month agreements he once had with the company, rather than opting for another five-year contract.

More than 98 per cent of shareholders voted at September’s annual general meeting to keep O’Leary as chief executive. As things now stand, it’s unlikely that they or the board will change their minds when they meet again on September 19th next.

However, some are looking to a time when O’Leary will no longer lead the airline. In October, the UK’s Local Authority Pension Fund Forum (LAPFF), which holds £230 billion of assets on behalf of British council workers and owns 1 per cent of Ryanair, wrote to the company calling for it to outline its succession plan for the chief executive to shareholders.

Ryanair has never formally said it has a succession plan, but O’Leary has acknowledged that the company, like all others, does indeed have one. In terms of who should get the job, he has pointed out several times that there are plenty of good candidates inside and outside his organisation, and the airline should consider them all.

While O’Leary is likely to be around for some years yet, reports suggest that LAPFF wanted his long-time ally, chairman David Bonderman, gone from the board by the end of 2019. Its chairman, Ian Greenwood, said that it would air both issues at next year’s agm.

Ahead of this year’s general meeting, several “proxy firms”, which advise shareholders on corporate governance, recommended that they oust Bonderman as he could no longer be considered independent.

These groups cited his long tenure – he has been chairman since Ryanair floated in 1997 – and his ownership of 7.5 million shares among the reasons.

There was nothing new in this. Firms such as Glass Lewis and Pensions and Investment Research Consultants regularly call at agm time for Bonderman and senior independent director Kyran McLaughlin to go. Shareholders just as regularly ignore this, returning these individuals to the board with comfortable majorities.

That pattern shifted this year. Some 70 per cent of shareholders voted for Bonderman and 68 per cent for McLaughlin. It was the sort of majority that would have politicians cheering, but it was less than that previously attracted by either man and well off the 98.5 per cent that O’Leary commanded.

In fact it’s unusual to see both a chair and senior director of any Irish-listed company returned with less than 90 per cent.

Also, there were signs are that both risked garnering less support next time. Alison Kennedy of Aberdeen Standard, which owned 11 million Ryanair shares at the time of its agm, said her company thought long and hard about voting for Bonderman and McLaughlin.

She warned that it would vote against both if there were not “clear progress on succession for these two key board positions by the time of the agm next year”.

Staying in the job

Bonderman kept his own counsel. O’Leary told reporters afterwards that the chairman was doing Ryanair a favour by staying in the job, and added that he hoped the board could persuade him to remain for another few years. Nevertheless, there was a sense that Bonderman and McLaughlin were vulnerable. LAPFF’s subsequent move upped the ante, particularly for the chairman.

Among other things, shareholders such as the councils’ forum and Aberdeen Standard argue that Ryanair’s corporate governance needs to change in light of the airline’s new industrial relations regime.

That changed radically a year ago when the company broke a long-standing policy and agreed to recognise trade unions. Not unexpectedly, this did not prove easy. During the summer the Irish Airline Pilots’ Association (Ialpa) held a series of one-day strikes at Ryanair.

Other unions, including those from Belgium, Germany, the Netherlands and Sweden, joined it on the picket line in August. The sides settled the Irish dispute, which was focused on issues such as leave and base transfers, after industrial relations trouble-shooter Kieran Mulvey stepped in as an intermediary.

The strikes caused little enough actual disruption, but a profit warning issued by Ryanair in early October indicated that they cost it €120 million. Some of that covered compensating or re-accommodating passengers whose flights the airline cancelled as a result of the industrial action. Some stemmed from the company cutting fares to lure customers whose fear of disruption deterred them from booking tickets.

Since then Ryanair has continued signing individual deals with unions around Europe, the latest with German pilots’ organisation VC and Portuguese cabin crew representative SNPVAC. That does not rule out further industrial unrest, as many of them are outline agreements, leaving the fine details to be hammered out in coming months.

One crunch issue, raised by European pilot and cabin crew unions, is the use of Irish contracts, which mean Ryanair pilots and crew are taxed here. The unions say that they end up with the worst of both worlds, paying their own jurisdictions’ social insurance and Irish PAYE.

O’Leary has explained several times in recent years that the Republic’s tax laws oblige it to do this. In September he pointed out that his company was lobbying the Government for a change to this regime, and last month the airline actually began a court challenge to the rules.

At the same time there is disquiet among unions at the growth of Ryanair Sun, a Polish-registered subsidiary that workers’ representatives claim allows the airline avoid concessions given to organised labour and hire staff on self-employed contracts. The company responded to this by saying that many workers were happy with this as they were better paid.

For obvious reasons airline workers do not tend to strike in the depths of winter as it makes more sense to do so during the peak travel months in summer. That gives Ryanair several months to make progress on detailed agreements with its main unions, something it hopes to complete by March.

This year’s skirmishes with labour groups took their toll. The €120 million bill was a key factor in Ryanair warning in October that profits for its financial year, which ends on March 31st, would be between €1.1 billion and €1.2 billion, instead of the €1.25 billion to €1.35 billion that it originally indicated.

Its shares have also fallen. At the beginning of this year they traded at just over €15, and reached highs of about €17 in January, valuing the company at around €20 billion. By the middle of December the stock was hovering close to €11, valuing Ryanair at €12 billion.

Other factors fed into this decline. Rising fuel and borrowing costs made investors wary of airlines generally. So did Brexit uncertainty. Ryanair campaigned against the UK, its biggest market, leaving the EU.

Since then O’Leary has warned that a “no-deal” Brexit could temporarily ground flights between the UK and the rest of Europe. More recently, credit ratings agency Moody’s weighed in, saying that the Irish carrier’s cash flows could suffer in such an eventuality.

At this point Ryanair says that it is prepared for Brexit. It has taken out a UK airline licence, protecting its right to fly domestic routes there. The company is also taking steps to ensure it remains within EU rules, which ban shareholders from outside the bloc individually or collectively owning more than 49 per cent of any European carrier.

In the meantime airline casualties are mounting. At the beginning of this month Icelandair backed away from buying low-cost carrier Wow Air, leaving its rival facing a potential cash crisis. Just weeks before Copenhagen-based Primera Air collapsed. Flybe and Norwegian are seen as potential takeover targets.

O’Leary, along with most experts, believes more airlines will fall victim to a shake-up in European aviation as higher costs and lower fares hit home. In the past Ryanair has proved more adept than most at navigating turbulence in its industry, and it seems unlikely that its new industrial relations regime will change that.