How the five-star hotel guest relaxes over Christmas 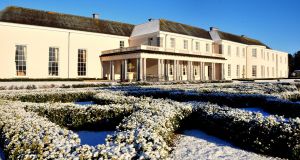 As you wrestle with inordinately dry turkey, wrangle with brussels sprouts al dente and struggle to make your way through Christmas pudding with the consistency of granite this festive season, remember that a select few avoid these sorts of problems. Yes, the other half are dining in five-star joints this Christmas where the food is sumptuous, the entertainment is festive and there’s merriment galore. Or so we’re told.

In Co Clare’s Dromoland Castle guests are invited to a three night celebration beginning on Christmas Eve at which a bagpiper will “herald the arrival of a special visitor”.

After shelling out €1,180 per person sharing, guests can dispense with the holiday hassles and enjoy the experience at a leisurely pace, relaxing on the Dromoland estate and strolling around the 450-acre grounds surrounding the castle.

On Stephen’s Day the festivities ratchet up a notch with guests poised to take part in many of the hotel’s “estate activities” from golf to archery to clay pigeon shooting and falconry.

“We filled about a month ago which is a very positive sign for the economy and we’ve a lovely blend of North American, Irish and UK customers,” said Mark Nolan, Dromoland’s general manager, who added that the presents from santa are expected to be “particularly nice this year”.

People are accommodate whether they’re the active type or just checked in to chill and although there’s no more room at the inn this Christmas, there’s always 2019.

If Cork is where you want to be this holiday season, the Castlemartyr Resort offers a “festive retreat like no other”. The resort has a plethora of options for guests who either want to stay two or three nights. On Christmas Eve, guests will be treated to a cocktail reception accompanied by “festive carols of our local choir” followed by a “delectable” five course meal.

Santa arrives on Christmas Eve to Castlemartyr while there’s also a gift in the room of each of the 100 guests from the hotel.

The usual trimmings follow on Christmas day and board games and movies are on offer later into the evening. The more active guests can tour the resort’s 12th century castle in the woodlands. On Stephen’s Day, to top off the stay, guests can book a “cosy carriage ride” around the castle grounds. Although they’re full, a three night package starts from €630 per night.

For the hotel’s general manager, Brendan Comerford, this year is his first working in a hotel at Christmas. “It’s important to create some memories for people when they’re away for Christmas,” he said, adding that the hotel caters to both large and extended families as well as smaller groups.

Across the country at “a most distinguished address”, options for the Shelbourne Hotel are slightly more flexible. Guests can stay for one or two nights if they wish. City life means the bells and whistles of a country estate aren’t to be availed of, while the price tag is more or less the same.

“It’s almost like an urban resort,” the hotel’s general manager, JP Kavanagh, told The Irish Times. “For many it’s just that tradition that the Shelbourne is synonymous with Christmas,” he said, adding that there’ll be about 300 for dinner on Christmas day. For a two-night stay at the Shelbourne, guests will fork out €675 per person for which they’ll receive traditional breakfast in the Saddle Room restaurant and a five-course Christmas lunch or dinner. For the younger contingent worried whether Santa will find them - the Shelbourne assures that he’ll be in the Lord Mayor’s lounge on the day. Additionally, there’ll be Christmas trees in all the kids room to make the event special.

If you want to be close to Dublin but escape the city humdrum, perhaps Wicklow’s Powerscourt hotel will appeal. The “Christmas celebration package” across two days costs €715 per person. On Christmas Eve, guests are invited to enjoy “mince pies, mulled wine and merriment” before a “sumptuous buffet dinner”. For the main Event, there’s a four-course Christmas lunch before guests trundle off to the Sugar Loaf Lounge to “play some games, sip a brands and settle into a magical Evening”.

Further up the east coast is the “grand dame of Belfast’s hotels” - the Merchant. In the “Great Room restaurant”, the menu will set you back £195 per person and that includes pre-lunch selection of canapés. The six course offering includes options like lobster and scallop ravioli and traditional turkey or Hereford beef. A two-night stay over the period costs £480 (€532) per person and includes dinner as well as a visit from Santa and live music on Christmas Eve.

Of course, Ireland isn’t the only game in town when it comes to Christmas celebrations.

Set up a rendez vous at Paris’s Place Vendome where the Ritz Hotel’s various restaurants can cater to your needs. Hotel rooms for Christmas day start from €1,200 while brunch at the hotel’s Salon D’été or its two Michelin star L’Espadon start from €210 per person. If it’s Christmas Eve dinner you want, a set menu including scallops, turbot and turkey at L’Espadon starts from €650 per person. The wine, alas, is not included.

For a “magical Christmas in Mayfair”, the Connaught hotel invites guests to the “place where Christmas shines brighter”. Christmas day lunch at the two Michelin star restaurant Hélène Darroze will set you back £295 per person. The six-course menu includes foie Gras, sea bass and guinea fowl.

A more traditional offering is available at the Jean-Georges restaurant where, for £145 each, truffle fritters, john dory and roast turkey are on the five-course menu. There are, however, no rooms available at the Connaught for Christmas day.

1 In this strangest of recessions, what happens next for Ireland?
2 Bank of Ireland sees about 2,000 staff apply for voluntary redundancy
3 Michael O’Leary is the boss you want to lead an airline out of crisis
4 Overhaul of lease arbitration regime would be a game changer for retailers
5 Estée Lauder staff at Dublin airport plan further strike action
6 Air travel never going ‘back to way it was’
7 FinCEN Files: Dublin-listed fund sent $23m to firm suspected of links to Russian crime boss
8 Best Covid-19 ‘influencers’ will avoid hectoring
9 Ireland’s Covid-19 economy in five graphs
10 Should I switch bank now with Ulster Bank at risk of closing?
Real news has value SUBSCRIBE