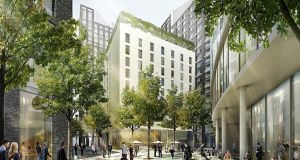 The 212-room Clayton Hotel City of London is due to open later this month.

Hotel group Dalata said it has completed the acquisition of a new hotel in London, ahead of its opening later this month.

The 212-room hotel will be branded Clayton Hotel City of London.

The Irish-based hotel group announced the deal in August 2018, saying it would pay about €100 million for Hintergard, which owns the 300-year leasehold of the hotel in Aldgate, London. The hotel was under construction at the time.

Dalata is Ireland’s largest hotel operator, with more than 8,000 rooms in 29 owned hotels, 10 leased hotels and three management contracts. It operates the Clayton and Maldron hotels across Ireland and Britain, and is currently developing eight new hotels with a total of 2,133 bedrooms, due to open over the next three years.