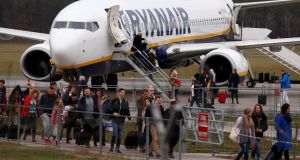 Britain’s aviation authority said it would take action to force Ryanair to pay compensation to customers affected by strikes held by its staff this summer.

The UK’s Civil Aviation Authority said in a statement on Wednesday that the strikes were not exempt from EU rules on compensation and it had started enforcement action against the airline.

Ryanair has suffered a number of strikes this year by cabin crew and pilots, forcing it to cancel hundreds of flights, after the airline recognised unions for the first time in 2017. Passengers claiming compensation will not have to await the outcome of the enforcement action, the CAA said.

Enforcement action is when the CAA seeks legal undertakings from operators to ensure they change their policies and comply with the law.– Reuters