Volkswagen: Nothing but electric from 2026 onwards

VW pledges that its last internal combustion engine will be launched in 2026, as VW Ireland announces a BIK-special electric Golf 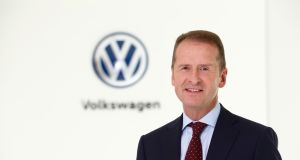 2026 is just eight years away - think of it as just two world cups. By that stage the Germans aim to have the lead in electric car development, potentially overtaking the initial lead opened up by Japanese and American car makers.

Volkswagen has committed that by 2026 it will have launched its last generation of cars that will use petrol and/or diesel engines. VW’s head of brand strategy, Michael Jost, speaking to the Handelsblatt automotive summit conference at Volkswagen’s headquarters in Wolfsburg, said: “In the year 2026 will be the last product start on a combustion engine platform.”

Now, that doesn’t mean that VW will stop producing diesel and petrol engines in eight years’ time. Nor does it mean a stop-sale for petrol and diesel models after that date. Given that the average new-car platform has a lifetime of roughly a decade, VWs that burn hydrocarbons will be on sale long into the 2030s and likely even into the 2040s. What it does mean is that new Volkswagen models after that point will be developed solely around electric power.

Jost said that the German carmaker is now committed to “radical steps to stop global warming.” Presumably those radical steps include a hefty mea culpa for triggering the still-rolling diesel emissions scandal, which has thus far cost VW €27 billion, and counting, in fines.

That’s a figure that’s dwarfed by the €44 billion VW has pledged to spend in developing an entire range of all-electric cars. Factories are already beginning to be re-fitted to allow for the construction of these cars, and VW is already at work on its own ‘Gigafactory’ to build its own batteries. Simpler processes, such as moving production of the VW Passat from Germany to the Czech Republic (where it can be built alongside its kissing cousin, the Skoda Superb) frees up space in other plants for electric car work. Less simple processes include negotiating with Germany’s tough-minded unions over just how many workers will be needed for these new cars, although VW has committed to no layoffs at its big Emden and Hanover production plants.

While a major part of this zeal for all things electric is down to VW rebuilding its image in the wake of the dieselgate scandal, the car maker is apparently back on a firm enough footing to come out fighting this week, and point out where other major industries are dragging their environmental feet.

“Producing cars in a Co2-neutral manner is only half the battle. Cars must be used in a Co2-neutral manner as well” said Herbert Diess, VW’s chief executive, speaking at the same Handesblatt conference. The industry cannot “save the world on its own,” Diess noted. But it certainly is willing to do its part, he added. He welcomed the current societal and political discussion about environmental and sustainability issues regarding individual mobility – but he said the “debate about imposing driving bans on certain vehicles and diesel retrofitting ignores the major climate challenges we face.”

Diess supported this position by noting that Germany had much more of a Co2 problem than a nitrogen oxide problem — a clear dig at those who continue to criticise diesel. He also noted that nitrogen oxide was largely a local phenomenon while Co2 emissions posed a global challenge. He said nitrogen oxide limits were exceeded only sporadically, that is, in certain cities and individual hotspots. He also noted that steps that were taken in the past were now producing the desired result of reducing those levels. “Nitrogen oxide will be a thing of the past in the foreseeable future,” Diess said. “Co2 emissions, however, will not be.” While it’s arguable that the nitrogen oxide issue would not have been tackled without the revelations of VW’s emissions cheating, Diess does seem to be trying to draw some kind of a line in the sand under the debate.

“No other automaker is so energetically tackling the topic of e-mobility as Volkswagen is,” said Diess, but he then went on to criticise Germany’s energy production network for its own high emissions, saying that there was not much point in producing zero-emissions vehicles if the national grid is still emissions-heavy. “On average, about 500-grams of Co2 are emitted for every kilowatt hour of electricity that is generated,” he said. He expressed concerns about Germany’s future direction, a development in which the country will turn its back on gasoline and diesel fuel and then rely on coal or even lignite in its energy mix. In the past, Diess has argued that the country’s primary energy sources need to be free of Co2.

While that debate is raging, VW in Ireland has just launched a tax-dodging version of the all-electric e-Golf. With the Government introducing a €50,000 cap on the price of an electric car, if the owner wants to get the zero-rate benefit in kind (BIK) tax advantage, the new e-Golf Executive gets extra equipment at a reduced price, keeping its price tag to €49,495 — and that’s before SEAI grants or VRT rebates are factored in.