Case to start amid allegations of theft, encrypted texts and secret meetings 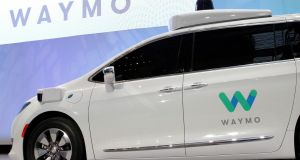 Waymo has accused Uber of stealing eight trade secrets that relate to the design of a type of sensor called Lidar that is used in self-driving cars, and the jury trial will begin on February 5th.

Ahead of the trial, here are five key questions to explain the case and what is at stake.

What is the central allegation of the Waymo-Uber trial?

Waymo has accused Uber of stealing eight trade secrets that relate to the design of a type of sensor called Lidar that is used in self-driving cars, and the jury trial will begin February 5th.

Waymo, which is owned by Alphabet, alleges that its former employee Anthony Levandowski downloaded Lidar designs before quitting Waymo to launch his own company, an autonomous trucking group called Otto. Just six months after leaving Waymo, Mr Levandowski, who by that point had become very friendly with Uber chief executive Travis Kalanick, sold Otto to Uber for about $680m and became the head of Uber’s self-driving car project.

Mr Levandowski’s conversations with Uber ahead of the acquisition — and the due diligence process conducted by Uber – will be analysed during the trial. Waymo alleges that the Lidar designs downloaded by Mr Levandowski were subsequently used by the car-booking company. Uber denies this, and says it will prove during the trial that it never used the designs.

To see how Lidar works, and why it is so important for self-driving cars, check out this video:

What is at stake for both sides?

A key issue for both sides is reputation. After Waymo filed this lawsuit a year ago, the discovery process has shed light on lots of things that look bad for Uber — particularly the fact that it proceeded to acquire Otto in spite of legal red flags.

The case has had an effect on Uber’s self-driving car programme, including that Uber was forced to fire Mr Levandowski in May. The legal wrangling has thrown a cloud over Uber’s autonomous vehicle programme, during a time when the competition to perfect self-driving cars is at an all-time high.

On the other hand, if the verdict is ultimately found in Uber’s favour, then Waymo could face a backlash for bringing a case with insufficient evidence.

Because Lidar technology is improving so quickly – and has made a lot of progress since the lawsuit was originally filed – the actual trade secrets in the case seem somewhat beside the point now.

What are the financial implications of the trial?

Waymo has mentioned a damages figure of about $1.8 billion, but has not definitively named an amount for what it will seek. Somewhat unusually, its damages expert was excluded from the trial.

The legal work to prepare for the trial has also been very costly — judge William Alsup recently estimated that Uber and Waymo must have collectively spent at least $300 million lawyers fees as they prepare for the case.

Who will be testifying?

The witness list reads like a who’s who of the autonomous vehicle world, and also included Alphabet leaders Sergey Brin and Larry Page. Also testifying is Mr Kalanick, Uber’s former chief executive. It will be his first public appearance since he stepped down from his role last June.

Even more notable though, is who will not be answering many questions: Mr Levandowski, the engineer who allegedly took the trade secrets to Uber, is pleading the fifth amendment, which refers to a witness’s right to avoid self-incrimination. During his deposition, Mr Levandowski invoked the fifth amendment more than 400 times. He is still expected to take to the witness stand during the trial, but will probably not comment on the events that are central to the lawsuit.

When will the case wrap up?

The trial is expected to end during the week of February 19th. The exact date of the verdict depends on how long the jury takes to deliberate, but will probably come before the end of the month.