Taxi drivers to get €7,000 grant for switching to electric cars 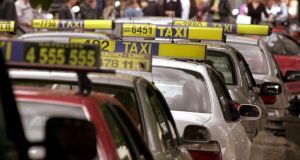 The taxi grant is the latest in a series of measures being introduced by the Government to promote electric car ownership.

Taxi drivers and operators of other public service vehicles are set to benefit from a new €7,000 grant scheme aimed at encouraging them to opt for electric vehicles.

Minister for Transport, Shane Ross, will this week announce a new incentive scheme offering a €7,000 grant towards the purchase of an electric vehicle for those with a small public service vehicle (SPSV) licence. That grant is on top of the existing electric car incentives – the €5,000 rebate on vehicle registration tax, a €3,800 grant from the Sustainable Energy Authority of Ireland (SEAI), and the upcoming new grant from the SEAI for installing a home-charging point.

The Department of Transport grant applies to any fully electric vehicle up to six years old, although the amount reduces according to the age of the car. A smaller €3,500 grant applies if you want to buy a plug-in hybrid electric vehicle (PHEV) for taxi use, but only those with Co2 emissions lower than 65g/km. Conventional hybrids are excluded.

The move is the latest in a series of measures being introduced by the Government to promote electric car ownership. Minister for Finance Paschal Donohoe introduced a one-year exemption on benefit in kind for electric vehicles in the budget, and it is expected that the exemption will be rolled out for at least three years, including a suspension of any benefit in kind levied on charging your electric car at work.

Meanwhile, Minister for the Environment Denis Naughten has stated that he is looking at other ways to encourage an increase in the move to electric vehicles, including making motorways tolls free for electric cars and banning sales of any non-hybrid or electric car from 2030 onwards.

However, the current financial incentives are still not having much effect.

That’s a 35 per cent fall compared to the 125 electric cars that were sold up to the same date last year. Part of this may be down to buyers waiting for the arrival on the market of key new models such as the second generation Nissan Leaf.

1 Who are Ireland’s 17 billionaires?
2 My father in a nursing home wants to gift me his house
3 Countries that fail to attract immigrants will lose out – Microsoft chief
4 Are there annual limits on inheritances or gifts to a child?
5 How to . . . move (almost) everything to your new phone
6 Apple’s secretive Cork facility opens up – to an extent
7 Davos Diary: Chilly reception for Trump’s ‘prophets of doom’ speech
8 Nama lends Cosgraves €15m to fund huge apartment development
9 O’Flynn company ‘mistakenly’ got go-ahead for Birmingham project
10 Dublin office vacancy rate hits lowest level in 20 years
Real news has value SUBSCRIBE