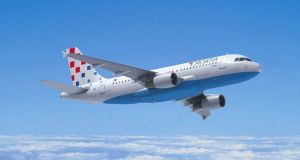 Croatia Airlines ran a number of charter flights between Osijek Airport in the east of Croatia and Dublin over Christmas.

Croatia Airlines is planning the first direct flights between Dublin and the country’s capital Zagreb this summer, according to reports.

The carrier studied the service’s viability last year in light of the Republic’s growing Croatian community and an increase in Irish holidaymakers visiting the Eastern European nation.

Croatia Airlines also ran a number of charter flights between Osijek Airport in the east of the country and Dublin over Christmas.

Reports on Tuesday indicated that the airline was likely to announce the Dublin-Zagreb route’s launch this month or next month when it gives details of this summer’s expansion plans.

There are no scheduled flights between Dublin and Zagreb. Travellers between both cities have to transfer at Frankfurt in Germany or other airports.

However, during the summer Aer Lingus flies to popular tourist destinations such as Dubrovnik and Split on Croatia’s Adriatic coast.

Dublin Airport does not comment on negotiations with individual airlines. It is in talks with several operators looking to launch new services from there.

1 ‘Life in Vilnius reminds me of Ireland in the 1990s’
2 Boeing identifies new software flaw in grounded 737 Max
3 Festive season boosts footfall at Arnotts and Brown Thomas
4 Dublin housebuilder records €11m gain after striking deal with bankers
5 Election adds to headaches for AIB boss Colin Hunt
6 Irish people like nothing more than being bribed with their own money
7 Hogan warns Britain on US trade deal as EU set to impose tariffs
8 GoMo is being investigated by advertising authority
9 Greencore investors urged to spurn Coveney’s €315,000 pension
10 Barclays to cut 100 senior roles as lender seeks to rein in costs
Real news has value SUBSCRIBE