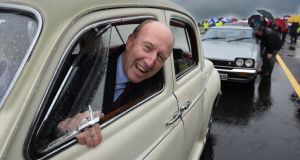 Minister for Transport Shane Ross is due to announce a new €7,000 grant for taxi drivers to opt for electric cars. Photograph: Ray Ryan

Today Minister for Transport Shane Ross is set to announce a €7,000 new conversation starter for your friendly local taxi driver, to go with their opinions on politics, sport and whatever they heard on Joe Duffy just the other day. In general, the new grant for buying an electric taxi is to be welcomed. As are other proposals, such as the recently-announced zero-rate benefit in kind for business electric car usage even if the promised three-year timeframe is still just that – a promise.

Yet what exactly are we hoping to achieve with all these schemes?

The answer of “promoting the buying and use of electric cars” is the obvious, but also oblivious, one.

Oblivious to the fact that effectively it’s subsidising the products of only a few car-makers at the moment. Nissan, VW, BMW, Tesla, Renault and Hyundai are the only brands currently offering pure-electric models for sale in the Irish market.

Oblivious to the fact that electric cars still draw their energy largely from the burning of gas, oil and coal – an electric car runs up CO2 emissions of around 80g/km when it is using the current national grid feed, which is about the same as a good hybrid and only marginally less than a good modern diesel.

Oblivious too to the fact that, thus far, electric car incentives have failed to trigger an electric car revolution. We all know that ultimately we will be driving electric cars, yet so very few of us are ready to make the leap from burning dead dinosaurs to depleting battery cells. We’re all still waiting for that next big leap.

What will it be? Norway is used as a poster child for how to grow an electric car market through incentives, but now its politicians are wrangling with how to wean buyers off such subsidies and start raising revenue through good old motor tax. Our politicians will also have to face that issue eventually.

Will putting public funds into private pockets work? It hasn’t for the past eight years since the first electric cars were launched on to Irish roads. Sales remain dismally small – just 622 cars out of 131,000 bought last year.

Perhaps it would be better to wait until the cars, with longer one-charge ranges, are more useful and useable for more people. But what to do in the meantime?