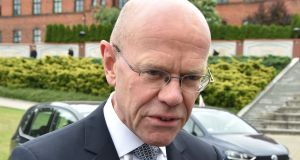 Volkswagen lobbyist Thomas Steg was suspended following revelations of emissions tests on monkeys in the United States and 25 human volunteers in Germany, co-financed by VW.

The European Commission has upped the ante in Germany’s Dieselgate debacle, giving Berlin until next Monday to present effective measures for cleaner air – or be hauled before the European Court of Justice.

The ultimatum from Brussels came as revelations of emissions tests of monkeys in the United States and 25 human volunteers in Germany, co-financed by Volkswagen, prompted the suspension of the group’s chief lobbyist.

Thomas Steg, once spokesman for ex-chancellor Gerhard Schröder, said he was aware of the tests. Subjects in the 2013 German experiment were, he said, exposed to pollution “considerably below levels at many workplaces”.

“What happened shouldn’t have been allowed happen,” he conceded in Tuesday’s Bild tabloid ahead of his suspension.

VW chief executive Michael Müller described the tests as “wrong, unethical and repugnant” and, in a letter to VW employees, conceded that “the crisis at Volkswagen is not yet over”.

“I apologise sincerely for the misconduct and misjudgment of those who were charged with this,” he wrote, saying VW is examining the work of EUGT, wound up last year, and would “draw all necessary conclusions” from that inquiry.

“Mr Steg has taken the full responsibility, something I respect,” added Mr Müller.

Greenpeace Germany derided the move as “crisis PR 101” and Mr Steg as the “scapegoat”.

“The real victims of a car industry that has buried all ethical standards are the millions of city dwellers on main roads,” wrote Greenpeace mobility expert Tobias Austrup. “The unscrupulous long-term studies are not taking place in laboratories but on German streets.”

After over two years of crisis meetings between industry executives and politicians in Berlin, the European Commission has demanded effective measures to bring air quality to within EU environmental limits , in particular nitrogen dioxide and fine dust particulate.

He was speaking after a meeting with ministers from nine countries, including Germany, France, Britain and Italy.

But dozens of German cities have air with levels of nitrogen dioxide that exceed the 40 micrograms/m3 limit and the German minister conceded that it was now unlikely Berlin would avoid legal action.

“We are not at the end of the path but the direction is correct and we are gaining pace,” she said, appealing for more time – and for car companies to do more to lower emissions.