Vessel has been sold to a Spanish company for consideration of €15.5m 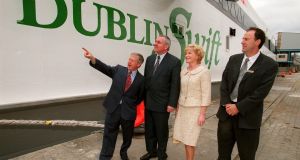 Irish Continental Group, the owner of Irish Ferries, is proceeding with the sale of its Jonathan Swift vessel for about €15.5 million.

The company has entered a memorandum of agreement with Spanish-headquartered Balearia Eurolineas Maritimas and plans to deliver the ship by the end of April 2018.

The €15.5 million consideration will be paid to the group on delivery of the ship which was taken into service by ICG in 1999 and has since operated on the company’s Dublin to Holyhead route. It will be replaced by the 2001 built high speed Westpac Express, which was recently returned to ICG after a period on external charter.

When it was delivered, the Jonathan Swift cost ICG €38.8 million. The disposal is expected to generate a book profit of roughly €14 million for the Irish-listed company which will be used for “general corporate purposes”, a statement issued Tuesday said.