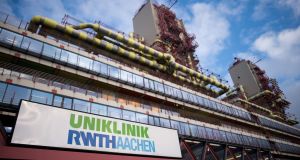 Volkswagen chief executive Matthias Müller has condemned as “wrong, unethical and repugnant” emissions tests on human volunteers co-financed by his company in the last decade.

Pressure is building on the German company to explain why, alongside BMW, Daimler and Bosch, it co-financed tests on monkeys and human volunteers condemned by the German government as “justified by nothing”.

In 2007 the German companies founded the European Research Group of Environment and Health in the Transport Sector (EUGT) to influence the debate on diesel emission health concerns.

Through the EUGT, they paid researchers to conduct emissions tests on monkeys in the US; in 2013in Germany 25 volunteers were tested after inhaling emissions that included noxious nitrogen dioxide.

VW boss Müller said on Monday he regretted his company was involved in EUGT activities while supervisory board Hans Dieter Pötsch said that “whoever is responsible for this will of course take the consequences”.

Senior executives from all four German companies liaised the EUGT. One Volkswagen executive informed about the 2013 tests is Mr Thomas Steg, the group’s chief lobbyist and onetime spokesman for ex-chancellor Gerhard Schröder.

“What happened, shouldn’t have been allowed happen,” he told Tuesday’s Bild tabloid. He said the US tests on monkeys was originally intended to involve human volunteers until he intervened. A later test on humans in Aachen was about testing emissions in the workplace, he said, and subjects were exposed to pollution “considerably below levels at many workplaces”.

Mr Steg, a VW employee since 2012, has insisted that then VW chief executive Martin Winterkorn was not informed about the tests. The company has said it will not finance animal testing in the future and has offered to find out what happened to the monkeys used in the US tests.

VW chief executive Matthias Müller said the tests his company co-financed had “nothing” to do with lobby work or scientific research.

One researcher involved in the German tests on human volunteers, Prof Ulrich Keil of the University of Münster, said he felt “shitty in hindsight” at having worked on studies the EUGT used to make the case for “clean” diesel technology. In 2015 VW technology was exposed by US environmental authorities as a multi-billion fraud.

Instead of lowering nitrogen dioxide levels, millions of cars sold under the VW, Seat, Audi and Skoda brands had cheat software to detect when the vehicle was being tested - and reduce emissions to legal levels.

After experts at a World Health Organisation (WHO) body declared diesel emissions caused cancer in 2012, the EUGT reportedly contacted the body in an attempt to prevent further research.

Daimler said it was “shocked” by tests it said contravened its “values and ethical principles”.

1 US threatens retaliation against EU over proposed carbon tax
2 Are there annual limits on inheritances or gifts to a child?
3 Little strategic thinking in election manifestos of Fine Gael and Fianna Fáil
4 Volvo warns of scaled back car line-up if UK splits from EU rules
5 CPL founders Anne Heraty and Paul Carroll in line for €1m dividend payout
6 NI house builder apologises to Harry and Meghan over adverts
7 Who are Ireland’s 17 billionaires?
8 Opioid executive admits to ‘no morals’ ahead of prison term
9 American YouTubers embrace the crisp sandwich
10 South Dublin Credit Union members urged to borrow more to ensure survival
Real news has value SUBSCRIBE