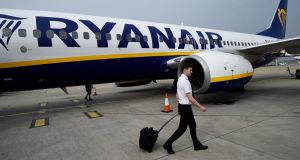 A pilot disembarks a Ryanair flight in London. Photograph: Reuters

Fears of further strike threats at Ryanair prompted a sharp fall in its shares, despite the airline pledging to return €750 million to investors this year.

The Irish airline said on Monday that revenues in the three-month period – the third quarter of its 2018 financial year – increased 4 per cent to € 1.4 billion from € 1.34 billion.

Chief executive Michael O’Leary confirmed that the carrier’s board had approved plans to buy back €750 million worth of shares between this month and next October, depending on market conditions.

Goodbody analyst Mark Simpson noted that investors focused partly on the airline’s warning that talks with unions could cause “some localised disruption and adverse PR”.

“We are fully prepared to face down any such disruption if it means defending our cost base or our high-productivity model,” Mr O’Leary said.

Ryanair agreed to recognise trade unions in December to avert threatened strike action at Irish and other airports.

Talks on similar agreements are under way with other European organisations.

“Our union recognition programme is ongoing,” Mr O’Leary said. “We have made significant progress in some countries and less progress in others.”

Analysts reported that Ryanair indicated talks with the Irish Airline Pilots’ Association (Ialpa) were proving more difficult than with some other unions.

Ryanair said later on Monday that it was still waiting for a reply to a recognition agreement for Irish pilots that it sent to trade union Fórsa on January 3rd.

Mr O’Leary said the proposed share buyback would increase the cash returned to investors since 2008 to more than €6 billion.

Mr O’Leary predicted that staff costs would rise €45 million this year on the back of pay increases and a boost to crew ratios, which he said was a response to a tightening market for experienced pilots.

Ryanair expects to have carried 130 million passengers over the 12 months to March 31st, the end of its current financial year, an increase of 8 per cent on 2017. It left guidance for full-year profit unchanged at €1.4 billion-€1.45 billion.

Stephen Furlong and Ross Harvey, analysts with Ryanair’s corporate broker Davy, noted that the airline’s third quarter profits were ahead of its €98 million prediction. They predicted that costs would rise next year as Ryanair paid up to €300 million more for fuel and €100 million extra to staff.

However, the analysts argued that the carrier would maintain its cost advantage over rivals and rated the stock an outperform, the equivalent of a buy. Davy set a price target of €18.

Ryanair announced plans this week to fly to Amman and Aqaba in Jordan. The airline will not be offering these services from the Republic as it says that Jordan is more than a six-hour flight and it has a wide range of European airports that are closer to the Middle Eastern country.

1 NI house builder apologises to Harry and Meghan over adverts
2 Volvo warns of scaled back car line-up if UK splits from EU rules
3 US threatens retaliation against EU over proposed carbon tax
4 Who are Ireland’s 17 billionaires?
5 Little strategic thinking in election manifestos of Fine Gael and Fianna Fáil
6 Opioid executive admits to ‘no morals’ ahead of prison term
7 Are there annual limits on inheritances or gifts to a child?
8 CPL founders Anne Heraty and Paul Carroll in line for €1m dividend payout
9 Cosgrave should give his speech to Web Summit’s partners in Saudi Arabia
10 Greencore to prove update on business after US exit
Real news has value SUBSCRIBE