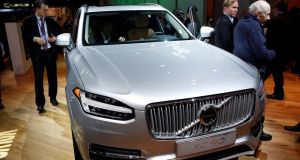 Volvo Cars’s chief executive has warned that the premature launch of self-driving technology risks delaying “the best lifesaver in the history of the car”.

Hakan Samuelsson said it was “irresponsible” to put autonomous vehicles on the road if they were not sufficiently safe, as that would erode trust among the public and regulators.

“We have a responsibility and everybody who’s in this business has that responsibility, because otherwise you’re going to kill a technology that might be the best lifesaver in the history of the car,” he said.

His comments came as Volvo launched a new safety campaign, using technology to try to eliminate drunk driving, smartphone distraction and speeding among its owners in a move it hopes will spark change across the industry, in the same way that its introduction of three-point seat belts did 60 years ago.

Some carmakers have launched partially-autonomous systems that can control steering and braking while on highways. But overstating the abilities of these cars will lead to “over-reliance” by consumers and cause accidents, Mr Samuelsson said.

“You have to be very careful when you introduce this, and that’s why I think it has to be safer than perceived,” he said, adding that responsibility for the vehicles “comes back to the ones who are selling the system”.

He added: “Doing it without being absolutely convinced the car can handle that [SITUATION]safely, then I think it’s irresponsible.”

While Mr Samuelsson did not name other manufacturers, his comments point to Tesla, which called its highway driving system “autopilot” and claimed that its latest vehicles are “fully self-driving”.

Several Tesla vehicles have been involved in fatal accidents, when drivers took their hands off the wheel and stopped paying attention to the road while using its automatic steering and braking feature.

Many carmakers also pulled back on testing autonomous systems last year after a fatal accident involving a self-driving Volvo that was being operated by Uber, although subsequent tests showed that the ride-hailing group had turned off many of Volvo’s own in-built safety measures.

Last week Volvo announced a range of technologies that it believes will reduce road deaths even sooner, with plans to tackle drivers who speed, or who drive while drunk or using smartphones.

A new eye-tracking camera is to be installed in new Volvos in the early 2020s that will monitor eye movements, detecting whether a driver is paying attention to the road.

It also plans to create areas where its cars will automatically slow down, such as around schools, using GPS technology.

The technology, which involves knowing the car’s location and the conditions around it, will also allow it to limit the speed of vehicles during icy or foggy conditions, making it “more effective” than speed signs, said Mr Samuelsson.

“You will know the road is eight metres wide and is rather curvy, and now it’s freezing and it’s dark and it’s snowing. You could have very good algorithms calculating that you should not be able to drive faster than 75kph on this road.” - Financial Times