Garuda asks Boeing to cancel $6bn order for 737 Max, may switch to other model 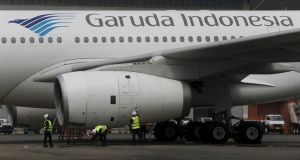 The airline could switch the order, valued at $6 billion (€5.3 billion) at list prices, to other Boeing models, Mr Rizal told Reuters. He said negotiations with Boeing were ongoing and Airbus SE jets were not under consideration.

Garuda is the first airline to publicly confirm plans to cancel an order for the troubled jets after the second crash of a 737 MAX 8, which killed 157 people in Ethiopia last week.

Indonesian rival Lion Air has been reconsidering its orders since one of its 737 MAX jets crashed in October.

Garuda chief executive Ari Askhara told Reuters on Friday that customers had lost trust in the 737 MAX 8. The airline has only one in its fleet at present.

“They have been relooking at their fleet plan anyway so this is an opportunity to make some changes that otherwise may be difficult to do,” CAPA Center for Aviation Chief analyst Brendan Sobie said.

Mr Askhara said last week it was possible it would cancel the order for 20 of the jets, with a final decision depending on what the US Federal Aviation Administration does after the Ethiopian crash.

He told Reuters before the crash that the airline had decided to reduce the Boeing 737 MAX order from 49 by swapping some to widebody Boeing models.

1 Phil Hogan says EU ready to do ‘ambitious’ UK trade deal
2 Who are Ireland’s 17 billionaires?
3 MEPs reject Central Bank’s Gerry Cross for key banking role
4 Fantasy figures: Why make election promises you can’t afford to keep?
5 Are there annual limits on inheritances or gifts to a child?
6 Ireland has EU’s most progressive tax system, study finds
7 Cairn Homes gets permission for 426 homes near Greystones
8 ChangeX: building a tech platform for a better world
9 Are you a Monica, Joey or Chandler when it comes to your data privacy?
10 Davos: OECD confident on digital tax deal as France takes swipe at Ireland
Real news has value SUBSCRIBE