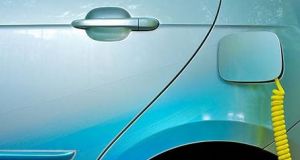 Although overall numbers are still relatively low, electric car sales have grown by 539% so far this year, while plug-in hybrid sales are up 166%. Photograph: Getty Images

Ireland’s first private fast charging point opens this week at the Four Seasons hotel in Monaghan. The location of the 50kW rapid charger is meant to offer an alternative to motorway service stations for electric car owners.

The charger is being installed by EasyGo, an Irish company which wants to take on the ESB’s current dominant position in publicly-accessible fast chargers.

Although overall numbers are still relatively low, electric car sales have grown by 539 per cent so far this year, while plug-in hybrid sales are up 166 per cent.

According to EasyGo’s founder Chris Kelly: “If a charger is used three to four times per day, then that works for us” said Mr Kelly. “When it comes to the finance side, though, someone has to be out there, bridging the gap for EV drivers. We’re not going to break even on these chargers in year one or year two. This is a long-term project for us.”

Those chargers will have a 50kW charging capacity, as will nine other upgraded chargers at locations in Offaly, Kerry, Carlow, Kilkenny, Sligo, Wexford, Tipperary, and Donegal.