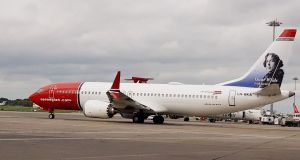 Norwegian Air said customers booked on transatlantic routes to and from Ireland serviced by the 737 MAX are to be rebooked on to flights using the 787-9 Dreamliner.

Boeing has recommended temporarily grounding its entire 737 Max 8 fleet after consultation with aviation authorities and its customers around the world.

The move came after US president Donald Trump said the US would ground flights by Boeing’s 737 Max 8 aircraft following the model’s second crash in five months on Sunday.

The decision to join other international aviation authorities came after Canada said it had received “new data” about Sunday’s Ethiopian Airlines crash that convinced it to ground the plane, becoming the first major aviation authority to signal the two accidents could be similar.

The American ban was announced by President Donald Trump. “Any plane currently in the air will go to its destination and be grounded upon landing until further notice,” he said.

Mr Trump said he had issued the order after speaking to Boeing, as well as the US airlines that use its aircraft. “We all agreed it was the right decision to make,” he said. Shares of Boeing fell around 2.5 per cent in the immediate wake of the announcement.

“Boeing is an incredible company,” the president said. “They are working very, very hard right now.”

The US joins a global rush to ground the single-aisle jetliner after the second deadly crash in five months even as US regulators reiterated that there is “no basis’’ for restricting flights of the plane.

Earlier on Wednesday Norwegian Air said it was to temporarily deploy a Boeing 787 Dreamliner to operate US flights from Dublin after the grounding of its 737 Max fleet earlier this week.

The airline said it was offering accommodation or the option of giving refunds to stranded passengers who had planned to travel to the Republic from the US. Norwegian said customers booked on transatlantic routes to and from Ireland serviced by the 737 MAX are to be rebooked on to flights using the 787-9 Dreamliner. The first rebooked flight on a Dreamliner departed from Dublin to New York Stewart International Airport at 3.20pm on Wednesday.

The airline said arrangements were being made to accommodate passengers booked to travel from Dublin to Stewart and Providence on the new Dreamliner service with plans to bus passengers to Providence upon arrival in New York.

Following its decision to ground its 737 Max 8 fleet on advice from regulators, Norwegian was forced to cancel a series of flights, including two out of Dublin on Tuesday and two due to arrive into the city on Wednesday morning from Providence, Rhode Island, and Newburgh, New York.

The decision affected as many as 768 passengers.

Norwegian had said it intends to seek compensation from Boeing for the cancellations. It grounded its fleet as a result of the crash of an Ethiopian Airlines flight killing all 157 passengers on board including Irishman Micheál Ryan, an engineer from Lahinch in Co Clare.

Boeing shares edged upward even as the US joined other nations in grounding the 737 MAX jets. The sahres ended up 0.5 per cent at $377.14, recovering from a more than 3 per cent fall in the afternoon. However they are still down about 11 per cent since Friday’s close. Tim Ghriskey, chief investment strategist at Inverness Counsel in New York, said the grounding gives Boeing time to address any problems and not face another potential disaster. “It seems like the worst is over for Boeing,” he said. “The fact that (the stock) appears to be stabilising means the market appreciates that.”