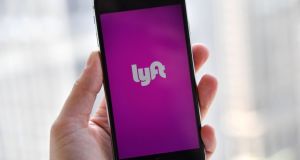 Lyft’s listing kicks off what is expected to be a busy period for technology IPOs with other Silicon Valley stars including Pinterest and Airbnb waiting in the wings. Photograph: Angela Weiss/AFP/Getty Images

Lyft is looking to raise up to $2.1 billion in its upcoming initial public offering, it said on Monday, as it seeks a valuation of almost $23 billion.

The San Francisco-based company suggested a price range of $62 to $68 per share in an updated filing with the US Securities and Exchange Commission. It will use the ticker symbol Lyft when it begins trading on the Nasdaq exchange later this month.

A $22.9 billion valuation, at the top of the range, would make Lyft worth more than the market capitalisations of tech companies including Hewlett Packard Enterprise, Twitter, AMD and Expedia, and almost half as much as Tesla.

Lyft would also be worth almost as much as Hilton, the hotels group, and Southwest Airlines.

The filing gives the first indication of what ride-sharing companies could be worth in the public markets. Lyft’s IPO is expected to be followed by a public listing from its larger rival Uber, which may fetch a market valuation topping $100 billion.

Lyft’s listing also kicks off what is expected to be a busy period for technology IPOs with other Silicon Valley stars including Pinterest and Airbnb waiting in the wings.

In Monday’s filing, Lyft said it would offer 30.8 million shares, while underwriters have the option to purchase an additional 4.6m shares. JPMorgan, Credit Suisse and Jefferies are the lead bookrunners for the offering.

After expenses, Lyft expects to see net proceeds of around $1.9bn, rising to as much as $2.2 billion if the underwriters exercise their purchase options.

Around 5 per cent of the shares will be offered for sale to some of its longest-serving drivers, who have completed more than 10,000 rides through its app, as well as to Lyft’s directors, certain employees and their friends and family.

At a price of $68 per share, Lyft’s two co-founders, Logan Green and John Zimmer, would see the values of their stakes rise to $569 million and $393 million respectively.

At a roadshow to market the shares, executives and their bankers are expected to emphasise Lyft’s revenue growth, particularly the rise in revenue per active rider, according to people with knowledge of the plan.