Norwegian passengers on transatlantic flights have had flights cancelled 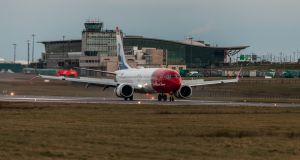 Irish travellers will face disruption as a result of the Irish Aviation Authority’s decision and that of Norwegian Air to ground all Boeing 737 Max flights travelling out of the Republic.

The Irish Aviation Authority (IAA) decided to temporarily suspend the operations of all variants of the Boeing 737 Max aircraft into and out of Irish airspace on Tuesday afternoon. The move followed a series of groundings by international airlines and other countries in the wake of the Sunday morning crash of an Ethiopian Airlines flight killing all 157 passengers on board including Irishman Micheál Ryan, an engineer from Lahinch, Co Clare, who worked with the United Nations World Food Programme.

“This decision has been taken based on ensuring the continued safety of passengers and flight crew, which is the IAA’s number-one priority,” the IAA said.

“The IAA has been closely monitoring the situation, however, as we do not currently have sufficient information from the flight data recorder we have, as a precautionary measure, issued instructions to stop any flights on Boeing 737 MAX from any operator arriving, departing or overflying Irish airspace.”

Any Irish passengers planning on taking a transatlantic flight with Norwegian would have travelled on the aircraft. Two flights due to take off on Tuesday - to Providence in Rhode Island due to leave at 14:55 and to Newburgh, New York, due to leave at 15:20 - were cancelled. The return legs of those flights out of the US were also cancelled, leaving up to 800 Norwegian Air passengers unable to fly.

As to whether passengers will be able to travel later in the week remains unclear and for those flying Norwegian will depend on the airline being in a position to free up capacity elsewhere in its fleet.

On Tuesday evening the European Union Aviation Safety Agency (EASA) issued an emergency airworthiness directive requiring all European operators not to use the Max 8 or Max 9.

Norwegian Air’s decision and that of the IAA followed a move by the UK’s Civil Aviation Authority to stop any Boeing 737 Max 8 commercial passenger flights arriving, departing or overflying UK airspace.

“We do not currently have sufficient information from the flight data recorder we have, as a precautionary measure, issued instructions to stop any commercial passenger flights from any operator arriving, departing or overflying UK airspace,” the CAA said in a statement issued at lunch time.

“The UK Civil Aviation Authority’s safety directive will be in place until further notice,” they added.

The move comes after investigators in Ethiopia found two black-box recorders that will provide information about what happened before the plane plunged into farmland minutes after take-off from Addis Ababa.

So long as the recordings are undamaged, the cause of the crash could be identified quickly, although it typically takes a year to fully complete an investigation.

The Ethiopian crash was the second in six months of the same model of plane. In October 2018, a 737 Max with Indonesian airline Lion Air crashed into the Java Sea, killing 189. The black-box analysis of that flight demonstrated that the pilots had difficulty in maintaining controlled flight as their aircraft repeatedly went into a nose-down dive.

There has been no information yet to link the Lion Air and Ethiopian Airlines incidents.

The scare has wiped billions of dollars off the market value of the world’s biggest planemaker, as the Boeing Co share closed 5 per cent down on Monday having fallen by as much as 13.5 per cent at one point.

Boeing issued a statement, saying it had been working with the Federal Aviation Authority (FAA) in the US in the aftermath of Lion Air crash to develop enhancements to flight control software that will be deployed across the 737 MAX fleet in coming weeks.

Boeing reiterated that it had “full confidence in the safety of the 737 Max”.

“We understand that regulatory agencies and customers have made decisions that they believe are most appropriate for their home markets. We’ll continue to engage with them to ensure they have the information needed to have confidence in operating their fleets,” the company said, adding that it doesn’t have any basis to issue new guidance to operators.

Meanwhile, the US FAA issued a “continued airworthiness notification” for the 737 MAX late on Monday to assure operators, and detailed a series of design changes mandated by Boeing.

Countries and airlines which have grounded the Boeing 737 Max include: