Spending on business travel up, according to Hilton chief

Road Warrior: Business travel on the up, welcome Cathay Pacific and Hainan Airlines 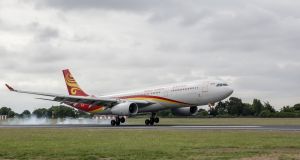 Companies are spending more on business travel these days, translating into stronger demand for hotel rooms as well as at hotel restaurants and bars, Christopher Nassetta, chief executive officer of Hilton Worldwide Holdings, said on a conference call on Thursday.

Hilton’s revenue from food and beverage sales increased 6 per cent in the first quarter from a year earlier. That gain outpaced growth in revenue per available room, which increased by 3.9 per cent. “Business confidence has been increasing and is at reasonably high levels,” Nassetta said. “They’re feeling good, and they are definitely both travelling more,” individually and in groups. “And they’re spending more.”

Hospitality-industry analysts have anticipated stronger demand for business travel following a US corporate tax cut signed into law by US president Donald Trump in December. Nassetta said his conversations with corporate customers have also revealed greater optimism thanks to a favourable regulatory environment under the Trump administration.Other hotel owners and operators have been mixed on whether a strong economy is translating to business spending.

It is a special month at Dublin Airport, when two airlines from China begin services from Dublin. Cathay Pacific will operate four times a week to Hong Kong, and Hainan Airlines will operate to Beijing, four times per week. Brown Thomas will, no doubt, be expecting an influx of Chinese shoppers.