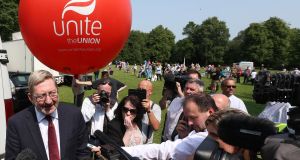 Trade union Unite has signed a deal with Ryanair to represent cabin crew based at Belfast and other UK airports such as Stansted and Manchester.

The deal is the second for cabin crew at the airline following a similar agreement with Italy’s Anpac/Anpav unions last week.

However, Eddie Wilson, Ryanair’s chief people officer, said that clashes over minor issues were slowing talks in smaller countries. A deal has yet to be agreed with cabin crew in the Republic.

A Unite statement yesterday stated that the union had signed a “historic” agreement with Ryanair to negotiate pay, hours and holidays for cabin crew.

The union added that the deal secured full consultation and collective bargaining rights for the employees.

Three representatives who will form the negotiating committee will get paid rostered time off to fulfil their union duties.

Unite general secretary Len McCluskey called it a significant step for Ryanair. The UK market amounts to 25 per cent of the airline’s fleet.

Mr Wilson said it was a further sign of the progress Ryanair had made with unions since its decision to recognise them in December.

“We hope to announce further agreements over coming weeks in those countries where unions have approached these negotiations in a practical and positive manner,” he said.

“We are making less progress in some smaller countries where minor issues (such as days off for union officials) are unnecessarily delaying agreements.”