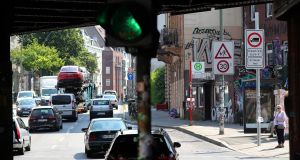 The domino effect of bans on older diesel cars started in Germany on Friday as the regional court in Aachen ruled local authorities must implement a diesel ban in the city by January to comply with EU air quality rules.

The hearing was the first since Germany’s highest administrative court in Leipzig declared in February that cities had a duty to meet EU air quality levels and that driving bans against older, more polluting diesel cars were an effective and legal way to achieve this. About 70 cities in Germany run afoul of EU pollution mandates.

Last month, the city of Hamburg implemented the country’s first “diesel ban”, restricting older diesel vehicles from the two main arteries to the city. Some environmentalists criticised the ban as more symbolic than effective. These groups hope - carmakers fear - that other cities will enact more expansive restrictions.

James Thornton, chief executive of ClientEarth, one of the parties suing a variety of German cities, said: “February’s ruling in the Federal Administrative Court made it absolutely clear - diesel restrictions are not only possible, but necessary, to bring illegal and harmful air pollution down in Germany’s towns and cities. We are anticipating similar outcomes across Germany in the coming months, as our other cases are heard.”

Jürgen Resch, head of the German environmental group DUH, added: “We call on all regional governments currently struggling with illegally dirty air to put in equivalent diesel restrictions. Otherwise we will legally enforce these standards, town by town. The regional court has confirmed that these measures are both and proportionate and beneficial for the quality of life in Aachen, which its leadership has previously refused to accept.”

The two groups together have brought 28 legal actions in cities across Germany and said more cases will be heard over the next months. – Copyright The Financial Times Limited 2018

1 Bank leaked my loan request to family who tried to rip me off
2 Eason acquires rival Dubray Books for undisclosed sum
3 Solar panels: Are they worth the investment?
4 When the Chemistry no longer works – the closing of a leading Irish ad agency
5 What is at stake for Ireland in the new Brexit talks?
6 Digicel’s earnings rise as it looks towards refinancing $1.3bn of bonds
7 Can I see my father’s previous wills?
8 Ryanair and Aer Lingus monitor impact of coronavirus on travel to Italy
9 Fuel company loses €1.3m challenge over tax bill
10 Coronavirus leads United Airlines to withdraw profit forecast
Real news has value SUBSCRIBE