Bombardier agreed in October to sell Airbus a 50.01% take in its flagship commercial jet 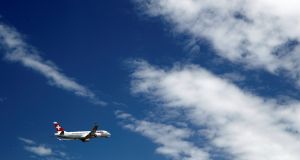 Airbus is set to close a deal to take a controlling stake in Bombardier’s CSeries jetliner programme, potentially safeguarding 1,000 jobs in Belfast, the companies said on Friday, in a move expected to kickstart the European planemaker’s ability to put its marketing and cost-cutting muscle into the Canadian plane programme. Bombardier agreed in October to sell Airbus a 50.01 per cent stake in its flagship commercial jet for a symbolic Canadian dollar, as the plane programme battled sluggish sales and low production, which made it harder to keep a lid on costs.

Airbus, by contrast, will be able to offer airlines deals by packaging the CSeries with its own jets and is expected to use its purchasing prowess to drastically cut the price of parts, along with improving efficiencies internally.

Unite, the UK’s largest union, welcomed the new partnership and said the manufacture of wings for the C-Series would remain in Belfast where 1,000 people are employed on the programme.

“We have received assurances that this will mean that employment associated with the manufacture of C-Series wings will remain in Belfast,” said Davy Thompson, regional officer of Unite.

Bombardier will now own about 31 per cent, while Investissement Quebec, the investment arm of the province of Quebec, will hold a 19 per cent stake. The Quebec government, through its financing arm, took a 49 per cent stake in the CSeries program in 2015 for $1 billion. Quebec’s share, most recently worth 38 percent, slipped to 19 percent following the deal with Airbus. The deal was announced at a time when Bombardier was locked in a trade dispute with US planemaker Boeing.

The dispute ended in March when Boeing said it will not appeal a US trade commission ruling that allows Bombardier to sell its CSeries in the United States without hefty duties. Boeing is now holding its own tie-up talks with Bombardier’s Brazilian rival Embraer. The closing allows Airbus’ sales team to promote the CSeries during campaigns to carriers such as Grupo AeroMexico and Ethiopian Airlines, with the European planemaker expected to boost orders and change the plane’s name to an Airbus brand. - Reuters

1 Ryanair and Eir the worst for customer service during Covid crisis
2 Irish elearning company LearnUpon closes €47.4 million investment
3 ‘Essential’ retailers risk a firestorm if they exploit the closure of the ‘non-essential’
4 Businesses call for more supports amid ‘devastating’ restrictions
5 Fair deal? Family at odds with hospital and each other not so sure
6 What to consider if older person or loved one needs care at home
7 Economists warn that GDP will fall again over Level 5 restrictions
8 Central Bank finds litany of shortcomings in fund firms
9 Aldi to impose limits as Christmas toys go on sale
10 PlanNet21 eyes further acquisitions after buying rival eCom
Real news has value SUBSCRIBE