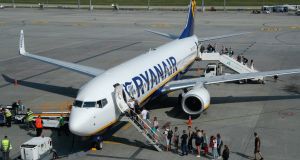 Ryanair said results made it appropriate to raise its full-year profit after tax guidance range from €800m-€900m to a new range of €950m-€1.05bn

Ryanair has increased its expected full-year profit guidance following sales over the Christmas and the new year period.

Ryanair also said forward bookings from January to April were running 1 per cent ahead of this time last year.

“Ryanair believes this will result in slightly better than expected average fares in the fourth quarter, while full-year group traffic will grow to 154 million [previously guided at 153 million],” it said.

“This is a direct result of intense price competition with Lufthansa subsidiaries in both Germany and Austria who are engaged in below-cost selling,” said the airline.

Laudamotion now expects to carry 6.5 million passengers in the year to March 2020, but at average fares that are €15 below budget, with the result that Laudamotion’s net loss for the year will widen from under €80 million to about €90 million.

Ryanair said the results over the period made it appropriate to raise its full-year profit after tax guidance range from €800-€900 million to a new range of €950 million-€1.05 billion.

“On the basis of current trading Ryanair expects to finish close to the mid-point of this new range,” said the airline. “Ryanair will release its third-quarter results on February 3rd, and will update shareholders in further detail on these trends at that time.”

An analyst with Goodbody said its advice was for investors to buy stock in the airline.

Furthermore, it said the increased full-year profit guidance “clearly has implications for the other airlines in Europe”, with EasyJet scheduled to be the first airline to report on its December trading period on January 21st.

Shares in EasyJet were up 3.4 per cent at lunchtime on Friday.

An analyst with Davy, also addressing the update from Ryanair, said: “We believe momentum into the summer in a very tight market will be powerful,” he said.

The increase in the airline’s stock will be welcome following news last week that it is prepared for further delays to the delivery of its Boeing 737 Max aircraft.