Uber and Hyundai Motor team up to develop flying taxi 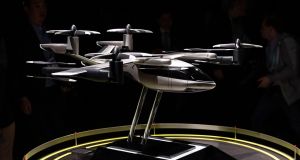 Their all-electric, four-passenger air taxi, a prototype of which was unveiled at the Consumer Electronics Show in Las Vegas this week, will be piloted initially but over time will become autonomous, Uber said. It has said it aims to conduct test flights this year and hopes to begin commercial operations within three years.

Uber sees the air service, one of the most futuristic aspects of its vision to become the “Amazon of transportation”, as a way to get people out of privately owned cars and into its shared vehicle network. However, the regulatory landscape for air taxis remains largely undefined.

Hyundai, the world’s fifth-largest automaker together with affiliate Kia Motors, is trying to catch up with bigger rivals in emerging technologies with consumers increasingly preferring access to ownership, a trend that has contributed to a fall in car sales worldwide.

Uber said Hyundai was the first carmaker to sign on to the project. Boeing subsidiary Aurora Flight Sciences is also a partner.

The flying taxi is designed to take off and land vertically, with a range of 60 miles and a top speed of 180mph. The air taxi market is expected to be worth $1.5 trillion a year by 2040, according to a report last year from Morgan Stanley, with passenger traffic comprising $851 billion of that.

Uber, through the Nasa-inspired project, will provide partners with airspace support services and connections to ground transportation while Hyundai will produce and deploy the air vehicles.

Euisun Chung, Hyundai’s vice-chairman, said at CES that the company would continue to collaborate with industry leaders on technology developments as global aircraft makers, automakers and tech firms pile into the segment.

However, experts said it would take a long time for flying cars to be available commercially given the huge technological and regulatory challenges.

“They need to build an ecosystem and supply chain in the absence of a regulatory framework. A flying car also requires much advanced technologies than autonomous cars,” said Lee Hang-koo, a researcher at Korea Institute for Industrial Economics & Trade.

“I don’t think the service will be commercially available in the next seven to eight years,” he said. – Copyright The Financial Times Limited 2020